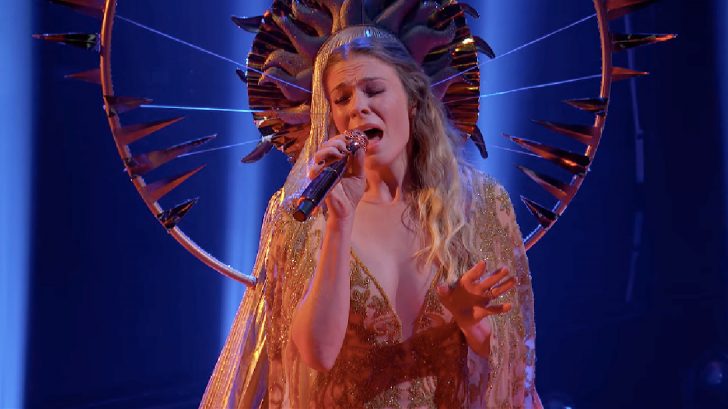 Season 4 Masked Singer champ LeAnn Rimes returned to the stage Wednesday night to perform her hit song “How Do I Live.” Rimes was joined for the finale performance by the three Season 5 finalists, Piglet, Chameleon, and the Black Swan.

Rimes, who was disguised as the Sun in her season, donned a stunning gold dress and stood in front of a backdrop that was reminiscent of her costume. Her impressive vocal range was on full display as she sang the familiar lyrics to a slightly tweaked tune.

LeAnn, 38, was only 14 when she first recorded “How Do I Live” for the Con Air movie soundtrack. Ultimately, Rimes’ rendition didn’t appear in the movie, but went on to be one of her biggest hits.

According to Wide Open Country, songwriter Diane Warren wrote the song for Con Air and promised it to LeAnn. But, when executives heard Rimes’ recording the thought it sounded too “pop” and didn’t think the teen was old enough to record the song. So, Trisha Yearwood was enlisted to record the now-famous tune for the soundtrack.

Both women released the song as a single and recorded music videos for it. And, they were both nominated for Grammy awards for Best Country Female Vocal Performance for their respective renditions. It was the first time in the Recording Academy’s history that two artists were nominated for the same song.

To add more drama to the song feud, Rimes was asked to perform the song live during the Grammy award show just before Trisha won the trophy for the category.

Regardless, “How Do I Live” went on to be a hit for both artists, and it was a delight to hear LeAnn Rimes sing it live once again Wednesday night. Watch LeAnn and the Masked Singer finalists perform “How Do I Live” in the video below.