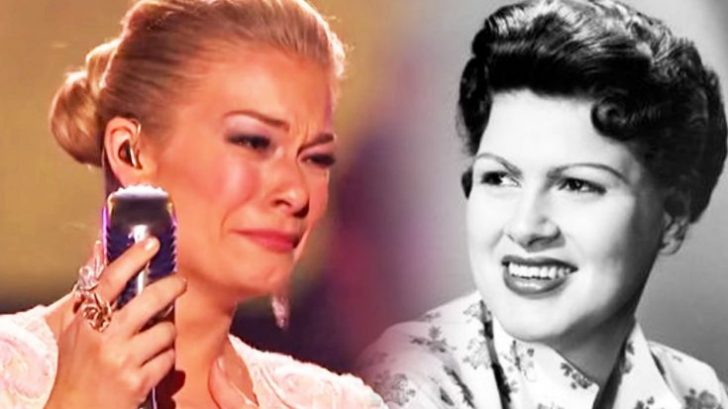 In 2013, LeAnn Rimes had the opportunity to honor one of her idols and one of the brightest stars in all of country music history…Patsy Cline.

During the American Country Awards, Rimes was tasked with performing a medley of some of Clines’ classic songs. Those songs were ones that all devoted country fans know by heart, such as “Leavin’ On Your Mind.”

Rimes also performed what is arguably Cline’s most iconic song “Crazy.” Even though it’s now the song most people associate with Cline, it never reached the top of the charts.

In fact, Cline only earned two number one hits over the course of her career.

The first was perhaps her second most well-known song, “I Fall to Pieces.” Her second number one came immediately after “Crazy,” and was titled “She’s Got You.”

In addition to singing “Crazy” and “Leavin’ On Your Mind,” Rimes honored Cline with a few of her other songs, including “Sweet Dreams” and “Walkin’ After Midnight.”

Rimes was the perfect person to fit for the honor, and not just because of her beautiful voice. Her appreciation for Cline and her music is something she has always been vocal about, so it was a given that she would do everything in her power to do her iconic songs justice.

Even though they existed in entirely different eras, it has long been rumored, though denied by songwriter Bill Mack, that Rimes’ debut hit “Blue” was actually written with the intention of having Cline record it. This longstanding rumor serves as just one more connection that Rimes has to Cline and her history.

Wanting to bring a sense of that history to her medley, Rimes’ performance was filmed in a black and white filter to give it a vintage feeling. Her wardrobe, consisting of an elegant white gown and updo, also enhanced that historical feeling.

To top it all off, Rimes cradled an antique-style microphone in her hands as she passionately sang Cline’s songs with tears in her eyes.

All of these little details made Rimes’ stunning performance all the more so. Go ahead and check it out in the video below. We feel like Cline would be proud of how she performed her beloved songs.