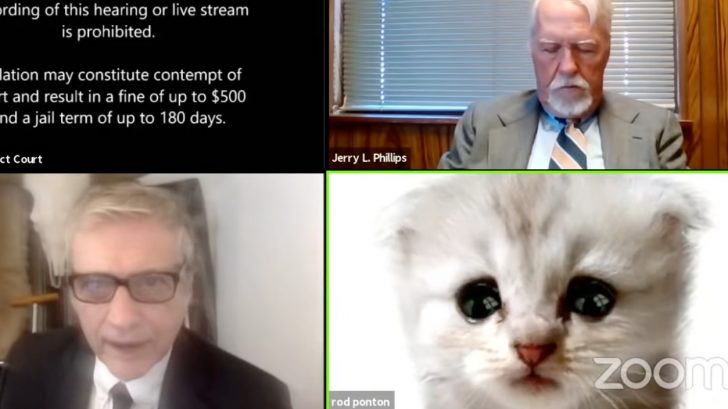 “I’m not a cat,” he tells the judge as the cat filter mimics his eyes looking around and moves its mouth to his words.

Anyone who has been doing Zoom calls since the world shifted to work-from-home has certainly learned that the app lets you change your background to appear on an island vacation or at a famous landmark.

But, what many of us didn’t know until recently is that you can add a filter on top of the camera that makes you appear as baby Yoda, a cute dog, or in this case – a doe-eyed kitten.

Attorney Rod Ponton joined a Zoom hearing for the 394th District Court of Texas and he appeared as a small white kitten with giant green eyes – to everyone’s surprise (including himself.)

Apparently, the camera filter had been activated as an outside app before the call started and both Mr. Ponton and his assistant could not figure out how to undo it.

This is a situation that could likely occur for those of us sharing computers with our children who clearly know how to use Zoom in a whole new way!

Clearly, Mr. Ponton did not intend to appear in court as a cat, but the exchange that followed was quite hilarious – the judge even seeming amused by the situation as he shared the clip on Twitter with a friendly warning for other Zoom users to check their settings!

See the full exchange below!