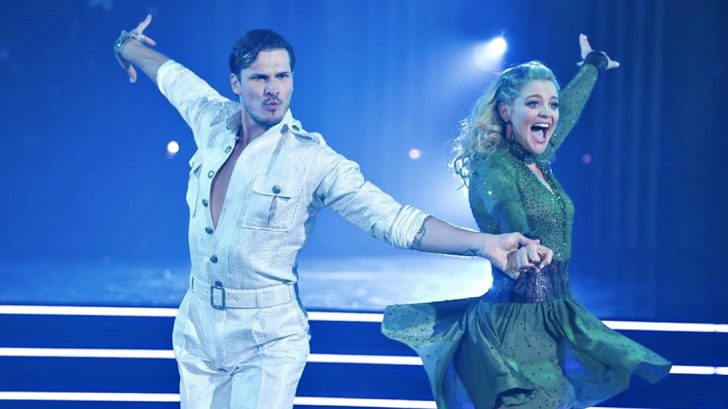 Country star Lauren Alaina showed off some fancy footwork during her Dancing With the Stars debut Monday night (September 16). The American Idol season 10 runner-up and her professional dance partner, Gleb Savchenko, pulled off a flawless Cha Cha routine choreographed around Shania Twain’s “Man, I Feel Like a Woman!”

Prior to hitting the dance floor, Alaina revealed that the reality dancing competition was the hardest thing she had ever done.

“It’s just so hard and my feet hurt and I have like blisters, and my back [is in pain]. I feel like someone strung me up by my hands and hit me with a baseball bat a few times,” Lauren told Us Weekly. “A lot of things that I’ve done that I focus on have come easily to me. Singing, performing, you know, being on camera, acting. I’ve had to work at it, but not like this. This is like a whole new skill set for me.”

Lauren Alaina isn’t the first country singer to compete on Dancing With the Stars over the course of its 28 seasons. Sara Evans (season 3), Billy Ray Cyrus (season 4), Wynonna Judd (season 16) and Jana Kramer (season 23) are just a few of the country music elite that have graced the dance floor. But, only one has earned the coveted mirrorball trophy.

In 2013, Kellie Pickler and her professional dance partner Derek Hough won the Dancing With the Stars title. The pair earned an unprecedented trio of perfect scores on their final dances, making Pickler the first and only country singer to win the trophy.

But, she wasn’t the only celebrity with country music connections to ever win. In 2018, Bobby Bones, dubbed The Most Powerful Man in Country Music, won Dancing With the Stars in one of the most controversial victories in the show’s history. The country radio host is also a good friend of Lauren Alaina and partially takes responsibility for her appearance on the show this year. Bones returned to the ballroom Monday night where he shared the reason why he encouraged Lauren to join.

“She played country night,” Bones told host Tom Bergeron. “And I was like, ‘I love Tom. I love [judge] Bruno. I love all the people’… and I was like, ‘You have to do it’ because she’s so loveable. And if people will vote for me, they’ll love Lauren!”

Alaina earned the third highest score of the season premiere, but its the judges and a public vote that will determine the singer’s fate. Tune in to ABC every Monday to see how Lauren fares!

Watch the video below to see Lauren Alaina and Gleb Savchenko perform their debut dance.