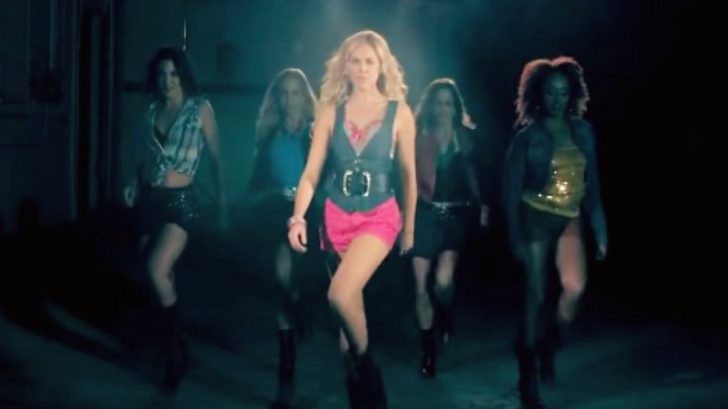 Getting Ready To Get Groovin’

Laura Bell Bundy will have you kicking the dust up with her sexy line dance to the tune of her 2013 country hit “Two Step.”

The music video kicks off with the multi-talented songstress slaving away in a blue collar factory job alongside her fellow female coworkers.

After clocking out, the ladies share a swig from their flasks before getting all dolled up for “girls night.”

Cranking Up The Heat

Bundy shows you “just how a country girl can get down” while flawlessly rocking hot pink stilettos.

The singer and her fellow two-steppin’ friends get down on the factory floor to a hot line dance you will be dying to show off at your next big night out.

You can even just dance along to the song in your own home, that’s fine too! In fact, if you cycle through the video a few times and dance along, you’re sure to work up a nice sweat and get in a good workout in the process.

Best known for her work on Broadway starring in major roles such as the original Amber Von Tussle in Hairspray and Elle Woods in the musical version of Legally Blonde, Bundy has released multiple country music albums, including Achin’ and Shakin’ featuring her smash hit single “Giddy On Up.”

We’d say that her transition from Broadway to country music was successful!

“Two Step” was released back in 2013 off her album Another Piece of Me and peaked at the 59th spot on the country chart. Another nice hit for the former Broadway star!

You can watch the video for “Two Step” in the video below. Let us know if you tried dancing along, and what you thought of the routine! It looks like a fun one to try out.