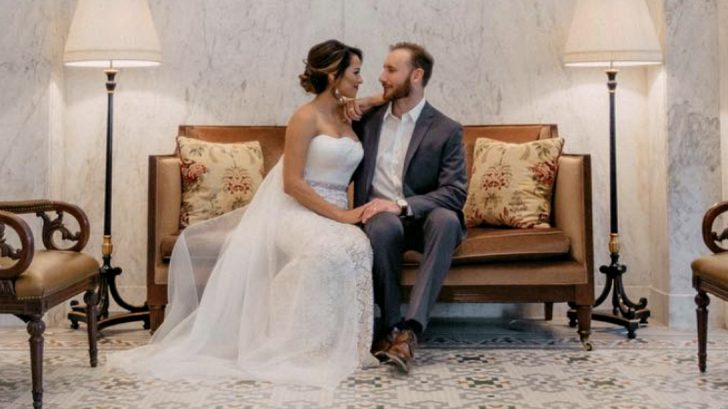 Two and a half years ago, Craig Strickland tragically passed away while duck hunting in Oklahoma. Now his widow, former Miss Arkansas USA Helen Wisner, has found love again and is sharing her touching story.

Craig Strickland, lead singer for country rock band Backroad Anthem, was only 29-years old when he and his friend Chase Moreland took their small boat out on Kaw Lake in Oklahoma and got caught in winter storm Goliath. Authorities found their capsized boat, and within a week had recovered their bodies.

At the time of his death, Craig had been married to Helen for only a year. Throughout the search and rescue operation, Helen posted to social media frequently and kept fans of Craig’s band informed. While Helen was open about her grief and heartbreak in candid blog posts following Craig’s death, she also knew that their story was bigger than even she knew and wrote often about God’s bigger plan.

“Never once did I get angry at God for my circumstances,” she wrote in her blog. “But there were times that I just didn’t want it to be real; and therefore, would ask Him if this didn’t have to be part of my life’s story. But it was there on that lookout point that I realized what I was experiencing was bigger than me.”

On the second anniversary of her husband’s passing, Helen was visiting Craig’s resting place with his family when her mother-in-law pulled her aside for a frank conversation.

“We want you to know that we want you to be happy too. You don’t need our permission, but if you were waiting for it, we want to tell you to move forward with your life, “Craig’s step-mother told her. “You’re so young, you don’t need to be alone. Not marrying isn’t proving that you love Craig more, and getting married doesn’t mean you love him less.”

With a blessing from Craig’s family, Helen began to move forward with her life. One night while she was cleaning, she came across her dad’s old video camera and started watching some of the videos that were still inside. On the video she saw the face of her high school sweetheart, Andrew Peters, whom she dated twice before meeting Craig.

Helen reached out to Andrew through Facebook where they began to pick up where they had left off years before. Soon after seeing each other in person again, Andrew asked Helen’s dad for her hand in marriage and Helen asked Craig’s parents for their blessing. In April, Helen and Andrew were married in a private, low-key ceremony.

Exciting life changes and big news to announce. God is SO good and He has taken care of me every step of the way…through the worst and best moments of my life, God has always been there ❤️ Can’t wait to post my newest blog series telling you all about how I met and why I recently married my now husband, Andrew Peters. I also can’t wait to share with you about his life story as well. Thank you all for loving me throughout my grieving process, and walking with me into a new chapter of life. Thank you to all the friends and family that celebrated with us this weekend! Love you all ❤️ Wedding photos to come by @lydichristine Photo Credz: @mrskaleynicole ?

Helen Strickland Peters continues to share her story through her blog and speaking engagements in which she encourages others who have been through similar circumstances.

Congratulations to Helen and Andrew on their marriage!