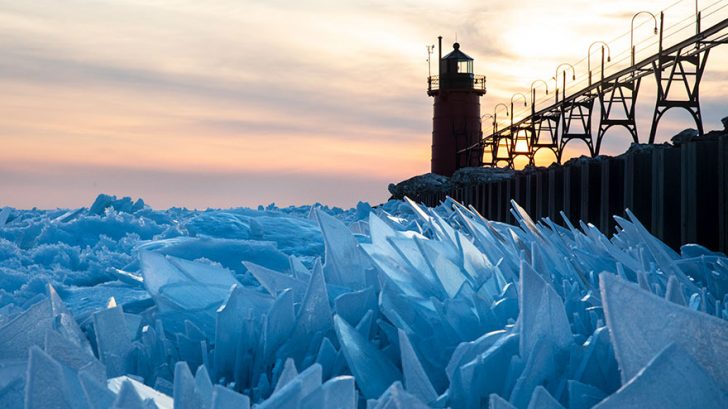 According to Weather.com, the United States of America is experiencing the most-below-average temperatures than anywhere else on Earth right now. As you can see in the image below, this winter has been extremely cold for the folks in the U.S. – but for the rest of the globe, they are interestingly receiving above average temperatures.

One place in particular that has been turned into a Winter Wonderland is Lake Michigan. Reports from BoredPanda.com say that Chicago, Illinois has seen temperatures as low as -23F (-30C) this year, turning the lake into one big sheet of ice. But now that Spring is here it’s starting to crack, break and shatter, resulting in an amazing display of billions of icy shards.

It’s incredibly beautiful to see. They say the shards of ice have been formed from the lake first freezing over – and then moving water under the ice breaking the top layer and pushing the broken pieces on top of each other. It does this over and over again until you get what you now see in the pictures. Just piles and piles of broken ice pieces stacked everywhere.

It’s reported that 56% of Lake Michigan was frozen over this winter and the Coast Guard has warned everyone to not go near it, for it’s very unstable and dangerous. One Coast Guard chief, Grant Heffner said, “No ice is safe ice especially this time of year. The ice is certainly deteriorating and breaking up.” So they are keeping everyone back from it.

Phys.org says we’ve actually been going through a polar vortex. Stating that “the Arctic air funneled into cities from Fargo to Pittsburgh to Detroit had prompted days of school and business closures, thousands of flight cancellations, a halt to mail deliveries, and a smattering of power outages and pleas for reduced heating.” It has even been reported that 21 people died this year due to the cold weather.

So if you’re in these regions make sure you stay bundled up until it passes. In the meantime, take a look at the video below that shows more pictures and gives additional details about this phenomenon.