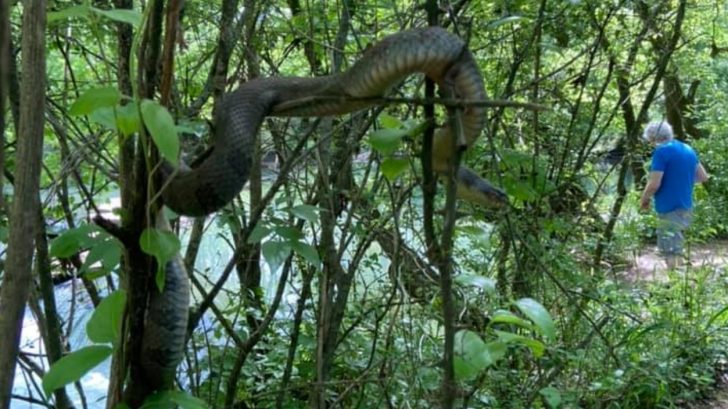 Courtnie Dunn was walking with her two children at a park in Smyrna, Tennessee on Monday when she spotted a fairly large snake slithering through the brush near a trail and took a picture of it.

“When I took this pic at Gregory Mills Park in Smyrna, TN, I let my mom know, who works for the city,” Courtnie said on Facebook. “She notified someone literally an hour after this happened to tell someone to immediately go check out the area,”

The incident happened at about 3:30pm while the family was standing close to a waterfall near the trail. She told media that the snake was longer than her four and five-year-old kids. She was trying to protect both her kids and herself, while simultaneously taking the picture.

“Has anyone else risked their life to take a pic because you just knew your husband wouldn’t believe you? Oh that’s just me, oh okay,” Dunn wrote in the post. “Still trying to control my breathing” she added.

At the time, she said she’s wan’t sure what kind of snake it was but she sent the photo to an expert and they believed, “judging by the pic,” it’s probably someone’s pet they didn’t want anymore and let loose into the wild.

View The Photo Of The Snake Below