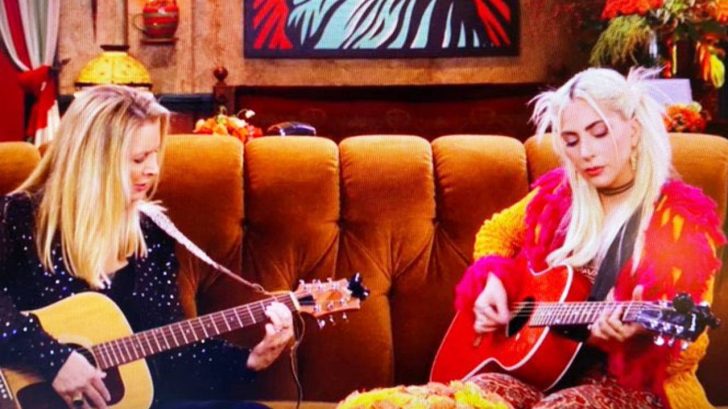 On Thursday (May 27), HBO Max premiered the highly-anticipated Friends reunion.

During the reunion, the cast revisited some of the most iconic moments during the ten-season run, including Phoebe Buffay’s song “Smelly Cat.” Lisa Kudrow sat on Central Perk’s iconic orange couch with her guitar and told the audience, “Yeah, don’t get too excited, I haven’t done this in a long time!”

After transforming into her character Phoebe, she started strumming and then singing the hilarious “Smelly Cat” lyrics. After singing the first – and only – verse, a surprise guest walked into Central Perk. It was none other than superstar Lady Gaga! And she was dressed just like Phoebe!

Not only did @ladygaga nail the #SmellyCat duet with @LisaKudrow, but her hair & outfit are totally Phoebe vibes! #FriendsReunion pic.twitter.com/EAx0Uh99Q2

Lady Gaga asked if she could take “Smelly Cat” for a whirl, to which Kudrow said, “Of course!” She

After the singer belted out the lyrics, Kudrow joined in for a fun duet. Then all of a sudden, a choir burst out from backstage to help them out! After the duet, Lady Gaga took the time to thank Kudrow for being “the different one” in the cast and being true to herself.

It was a moment Friends fans will never forget! Check out some reactions below.

Smelly Cat and everyone else: pic.twitter.com/Foe9lb2jmM

Lady Gaga and Phoebe… ummmmmmmmm bscuse me this is so iconic pic.twitter.com/SDREHHqItE

For a long time,I understand that Phoebe Buffay makes me laugh so hard everytime thats why she is my ultimate friend but not until I watched the #FriendsReunion where ladygaga cited of her character being different and true to herself is what makes me say amen louder!!! pic.twitter.com/E4Fjf9oSvN

Watch the duet below.