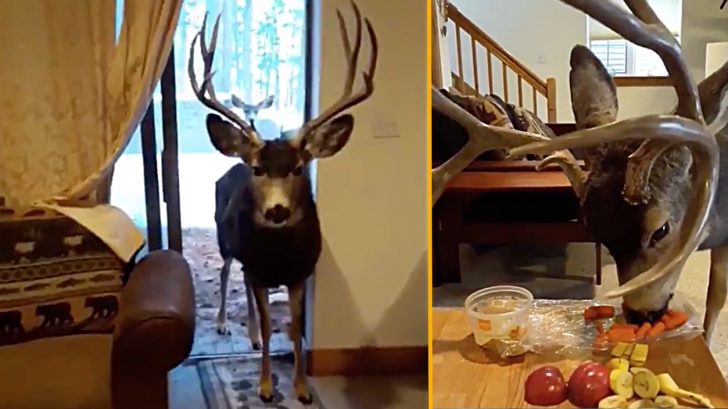 Evergreen, Colorado is a majestically beautiful place filled with pristine landscapes and an abundance of wildlife. People travel thousands of miles to experience it while other people just move there to live. One woman who lives there was recently put on blast by the CPW NE Region’s Twitter account for feeding the wildlife.

The video shows the woman luring a herd of deer into her home and feeding them bread, apples, carrots, bananas, and cereal. She calls the deer by names and talks to them as if they were her pets. A couple of them have fairly large antlers that if the deer decided, it could charge the woman and cause her harm.

The Colorado Parks and Wildlife (CPW) did not find the video too amusing. They stated in the Twitter post, “These egregious acts of feeding wildlife need to stop. It is selfish and dangerous, for both the animals and people, plus it is illegal. Let wildlife be wild, these animals are not pets.”

CPW felt they needed to remind the public that wildlife are perfectly fine surviving the winter on their own and that it is illegal to feed them. They said doing so can disrupt their natural migration patterns and cause them to congregate in one area. Which can lead to attracting more dangerous predators, spreading diseases easier, and herds can degrade the natural habitats in the surrounding area.

“I commonly find that mountain residents believe feeding deer and elk is a helpful and harmless act, but doing so habituates these animals to people in ways that completely alter the natural distribution of elk and deer and disrupts their natural wild behavior,” Wildlife Officer Joe Nicholson said in the CPW release, according to 9 News.

Watch Lady Feeding Wild Deer In Her House Below

These egregious acts of feeding wildlife need to stop. It is selfish and dangerous, for both the animals and people, plus it is illegal.

Let wildlife be wild, these animals are not pets. pic.twitter.com/IK7FlDll5s