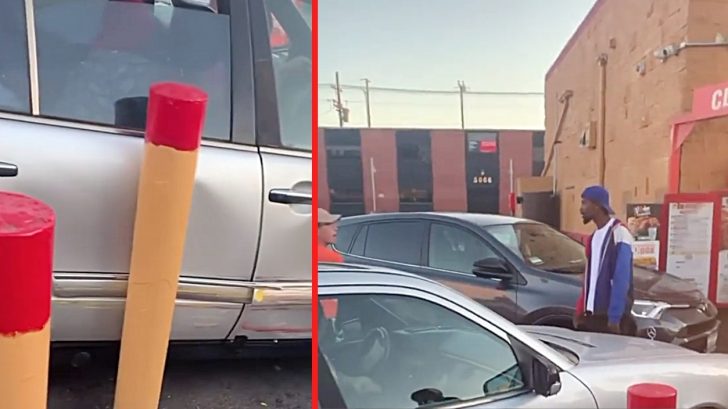 It’s happening again! Another person is going to extremes over Popeyes’ popular chicken sandwich that was just brought back to the menu on November 3rd. Already in three days since its release there have been videos of people angrily waiting in line, fights breaking out and one man was even killed over the sandwich.

A man was stabbed to death on Monday night outside a Popeye’s restaurant in Maryland during a fight over the fast-food chain's popular chicken sandwich.

Now a video has surfaced on Instagram (Nov 5th) showing a woman in Los Angeles trying to cut in line at a Popeyes drive-through in attempts to get her hands on the infamous menu item.

Things escalated real quick when the driver who patiently waited in line wouldn’t let the lady cut and the woman got so upset she was willing to destroy her car trying to force her way into the line.

There appeared to be 15-20 onlookers watching who screamed at the woman trying to let her know that she was smashing her car against metal poles. The lady doesn’t listen though, she continues to damage her car, scraping and denting both of her passenger side doors.

A Popeyes employee eventually comes out of the establishment and talks to the lady trying to get her to stop, but to no avail. She continues crushing her vehicle.

A man in the backseat of the woman’s car then gets out and proceeds to walk over and aggressively knock on the car window of the driver who wouldn’t let them pass. Onlookers laugh at the man and one of them tells the guy to open the car door.

The video cuts off and according to the Instagram post the lady who patiently waited in line drove off while people threw stuff at her car and the lady who destroyed her car got her chicken sandwich.

Overall, people need to calm down over this Popeyes chicken sandwich. It may be tasty but it’s not worth destroying your car over and it’s definitely not worth killing someone over.

Lady Destroying Her Car Video Below