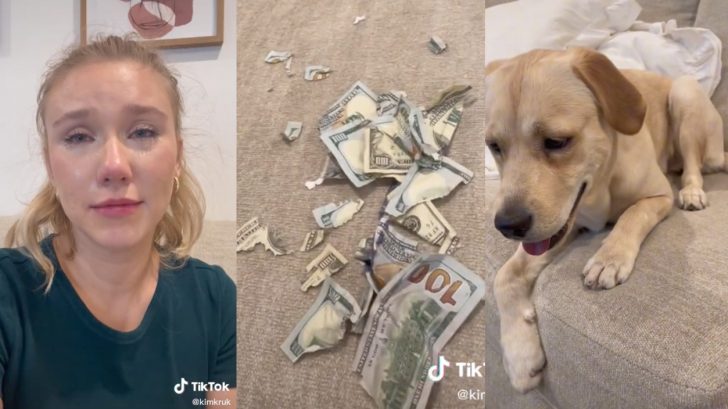 Kim Kruk shared a video on TikTok that went absolutely viral showing her crying after she came home to find that her dog had chewed up and torn to pieces more than $2,400 in one-hundred-dollar bills that her husband left on the dining room table.

The video has received more than five million views in less than 24 hours and starts off showing the shredded money laying on the coffee table and on the living room sofa.

The camera then pans around to show her crying and then pans again to show her happy dog named Zoey sitting on the couch smiling from ear to ear and looking at the mess she made.

“When you leave your lab alone for two hours and she manages to get to the cash on top of the table and ate about 2 grand…. Who wants her LMAO #labradorretriever #rip,” Kim wrote in the caption to the TikTok video.

@kimkruk When you leave your lab alone for two hours and she manages to get to the cash on top of the table and ate about 2 grand…. Who wants her LMAO #labradorretriever #rip ♬ original sound – Kim

The next day Kim posted another video updating everyone on what happened next in more detail and luckily for her, she had a lot of support from her viewers.

She says in the second TikTok video, “The video was kind of [an] in-the-moment kind of thing, and I’m going to explain exactly what happened. Since a lot of people are asking, my husband works this whole weekend. Actually, I barely saw him this weekend. It was a side job. And he works construction.”

She then goes on to explain that her husband got home from work and placed $2,700 in cash, mostly in 100-dollar bills, on the dining room table.

He then jumped into the shower, changed his clothes, walked Zoey, took the dog back home, and then drove to Kim’s parents’ house which was down the street. Kim was already there at her parents’ house visiting them and so the couple met up and spent a couple of hours there.

“Zoey really never reaches on top of our dining room table. She sometimes tries to look over our kitchen countertops to try to get to food, so we know not to leave food around or anything like that, because she’ll probably try to eat it but we never thought that she would try to eat paper or let alone money,” she said.

The happy couple then drove home in separate cars with Kim saying she arrived at their home about five minutes before her husband. When she first walked in, she noticed there was a ripped-up $100 bill on the floor and she began to scold Zoey.

Kim said, “I immediately got really upset with [Zoey] and you know, $100 is $100. For us it’s a lot of money. So I immediately went to go to the sofa to sit down and you know kind of talk to her and make sure that she understood that that was not OK. And when I get to the sofa is when I see all of the money that she had eaten and ripped up into tiny, tiny pieces.”

Out of the $2,700 that was left on the dining room table, only $300 of it was untouched. The rest of it was destroyed and she even ate some of it.

“I immediately started freaking out, started crying and that’s when my husband arrived. And he also almost had a heart attack. And that’s when I made the video,” she said. “I thought it would be funny to send to my, like, family members, my friends and I decided to post it on Tik Tok and here we are. But I am not upset at her. She’s a dog. She doesn’t understand what she did. And hopefully tomorrow we will be able to get some of the money back.”

Fortunately for her, some well-educated people began to comment on her video telling her that she can tape the money back together and then take it to the bank and they would replace the damaged dollars.

“I work at a bank mama, just tape it all back and go to the bank for exchange,” @libra.mya888 wrote in the comments.

“Take it to the bank to get replaced!!” @isssaydie encouraged her.

Zoey ended her second video by saying that she was going to take the money to the bank and see how much of it they can replace.

According to the U.S. Treasury, “mutilated” money that has at least over 50 percent of the note present, can be replaced at the full value. They also added that the top ways money gets damaged are from fire, water, deterioration from burying, or animals.