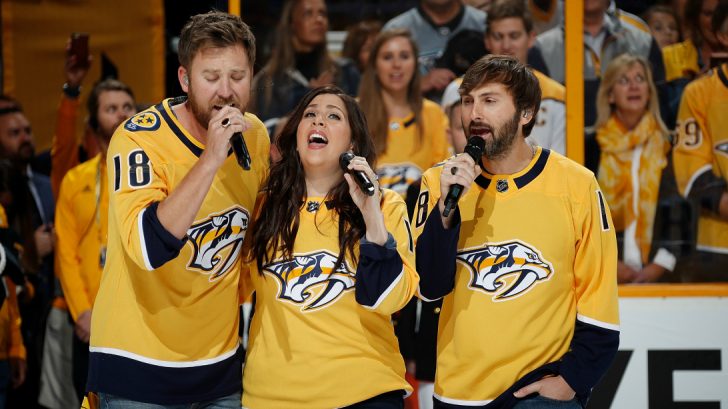 Lady Antebellum was the latest country act to perform the national anthem prior to a Nashville Predators playoff game, but their performance didn’t go off without a hitch.

The Grammy Award-winning trio made up of Charles Kelley, Hillary Scott and Dave Haywood made their way to the ice before the Preds took on Winnipeg for Game 5 of the second round Stanley Cup playoff series at Bridgestone Arena Saturday night. Kelley took the lead on “The Star-Spangled Banner” and got the song off to a beautiful start, but shortly after Scott joined in with harmonies, Kelley stumbled over the lyrics. Kelley was obviously flustered by the mishap, but finished the song with grace.

Lady A took to Twitter following the flub to share a photo of Kelley with his face in his hands with Scott and Haywood appearing to comfort him. “Welp. We’re human too, y’all,” the caption read.

But, many social media users were quick to criticize the group.

PATHETIC ! THAT YET AGAIN SINGER'S FROM THE USA ??DONT KNOW THE WORDS TO OUR "NATIONAL ANTHEM"….. CATASTROPHE

They are not amateur singers, they sing in front of big crowds all the time…no excuse

Boooo?? to @charleskelleyla of @ladyantebellum for messing up the National Anthem at the @PredsNHL playoff game. If folks would stop trying to make it into a “concert” ??‍♂️& just sing it how it’s supposed to go, there would be far ?less?mess?ups. ??‍♂️

But, fans of Lady Antebellum were quick to come to their defense.

Love this. Great recovery on it. Personally I think singing it as a trio would be harder than alone.

I love it when people OWN things like this, well done.

We think Lady Antebellum still delivered a great performance and hope that you all agree! Hear them sing the national anthem in the video below and let us know what you think.