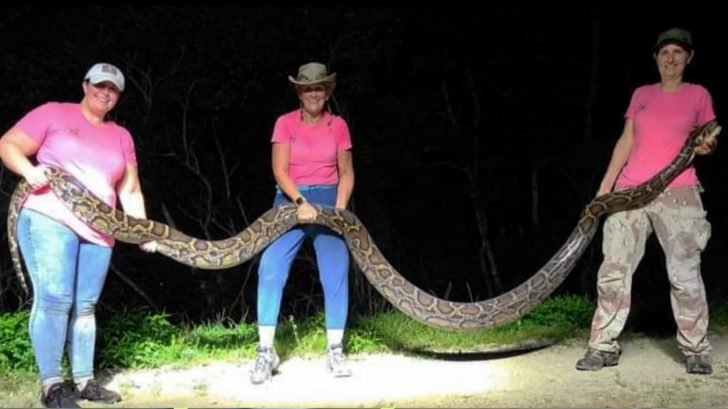 Donna Kalil, who won this year’s FWC Python challenge for most pythons caught by a professional, has teamed up with Marcia Pack and Jayna Corns to catch a massive monster python.

A picture posted to Facebook showed the three women holding up the python and it stretched a colossal 16 feet and weighed up 91 pounds.

The professional python hunters call themselves the “Everglades Avengers” and they found the python while on a mission in the Everglades. The ladies were called there by the state who were asking volunteers to come remove the invasive pythons.

Donna Kalil wrote on Facebook with the monster python, “16′ 91 lbs. Gave up a great fight but my Everglades Avenger team members @thegirlandthegators, Marcia Carlson Pack and I fought harder and won this battle for our beloved Everglades. Another deer eater has been removed,”

Donna said Marcia and Jayna were absolute troopers when she asked them to jump on the intimidatingly big snake. They all worked together to wrestle, wrangle, and kill it. Removing this invasive snake helps give the native species their land back.

Florida Gov. Ron DeSantis has challenged state agencies to step up their efforts in fighting against the invasive pythons and Florida Fish and Wildlife Conservation Commission Executive Director Eric Sutton says they are doing so.

Eric says having people like Donna come to the Everglades is very good for stabilizing the environment.

Not only has over 450 pythons left the Everglades on the back of her truck, but she is well known for her culinary expertise and shows her followers how to cook the white meat she says is packed with good protein.

Check out one of Donna’s cooking videos below.