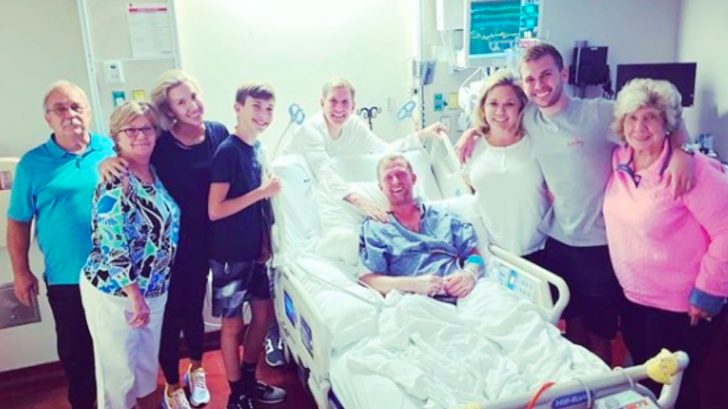 On August 28, Todd Chrisley shared a photo of his entire family (with the exception of estranged daughter Lindsie), gathered at the hospital to support his son, Kyle. A Chrisley family spokesperson told ET that the 27-year-old was rushed to the hospital after experiencing “an adverse reaction to his medication.”

The spokesperson said that Kyle was “fine” after going to the hospital, and his father echoed those sentiments. “Kyle is great and we are back to the grind,” Todd captioned the photo he shared from Kyle’s bedside in the hospital.

NOT TODAY SATAN, NOT TODAY… God shows up and shows out , now won’t he do it ? Kyle is great and we are back to the grind ..

Kyle’s hospitalization came during a time when the Chrisley family was already making headlines. On August 13, the U.S. Attorney of the Northern District of Georgia announced that Todd and has wife, Julie, had been indicted on 12 charges of fraud, conspiracy, and tax evasion.

The Chrisleys were taken into FBI custody the following day, but were released and placed on restricted travel.

During that time, Kyle spoke up to express his support for his father. The pair was formerly estranged, but has developed a closer relationship over the course of the past few months.

“My relationship with my dad was really rocky. I was battling drug addiction and I felt like he was trying to control me…9 months ago I went to my dad with an apology. His words were: ‘I love you always, and you are forgiven,” Kyle wrote in a post on Facebook.

Since he has grown closer with his father, Kyle decided to appear as a special guest on the newest episode of his podcast, Chrisley Confessions. And on that episode, Kyle confessed the true reason behind his recent stint in the hospital…he had attempted to take his own life.

Kyle said that the statement made about him having a bad reaction to his medication was truthful. That reaction was what caused him to have suicidal thoughts, which is why he ended up in the hospital.

“I take medication and I had a bad side effect to it and I tried to take my own life,” he revealed in the podcast.  “With the meds, I got all kinds of crazy thinking going on,” he said.

Todd spoke in support of his son, saying, “I think some of the medications they put you on—that you had not been on—one of the side effects is suicidal tendencies.” He then went on to share that Kyle is no longer taking those medications.

Kyle said that he is doing well now and is already back at work.

We can’t imagine how scary this whole situation must have been for Kyle’s family. We’ll be praying for his continued good health.