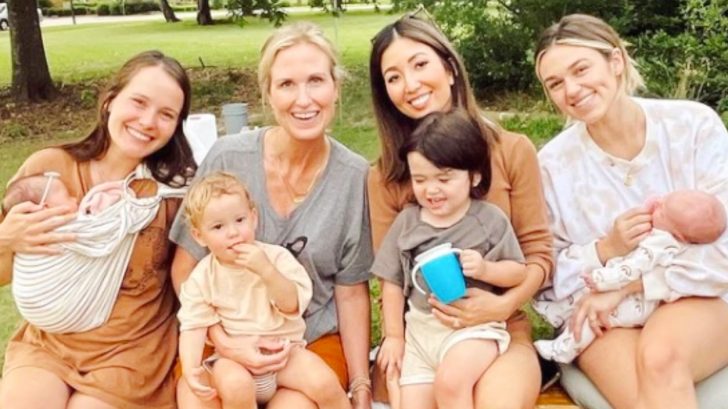 Korie Robertson‘s heart (and hands!) are full. She is now a grandma of four, and she’s cherishing every moment she spends with her grandkids.

While starring on Duck Dynasty, Willie and Korie Robertson became one of the most beloved couples in America. After the show ended, their millions of followers continued to keep up with them and their children: Rebecca, John Luke, Sadie, Will Jr., Bella, and Rowdy.

In the years since Duck Dynasty wrapped filming, Willie and Korie’s kids have had kids of their own. Rebecca and her husband John Reed Loflin were the first to welcome their own little duckling…a son they named Zane. He just turned two on January 11.

John Luke and his wife, Mary Kate, were the next ones to welcome a baby. They had their son, John Shepherd, on October 14, 2019.

Then, John Luke and Mary Kate welcomed another new addition this year! Their daughter Ella Kathryn was born on April 8.

Mary Kate was pregnant at the same time as her sister-in-law, Sadie. Sadie and her husband Christian Huff also had a baby girl: Honey James.

Honey was born on May 11, so she’s not even a month old yet!

Korie loves to share photos of her grandkids on her own social media pages. She is one proud grandma!

Recently, Korie shared an adorable photo of her with all four of her grandkids. The picture shows her with Mary Kate, Rebecca, and Sadie, who were all holding their respective children. Korie sat between Mary Kate and Rebecca, and balanced John Shepherd on her lap.

Korie adores the photo, saying it’s now her “favorite pic.” She said it’s the first one she’s ever taken with all four of her grandkids at the same time.

“Currently my favorite pic…The first with all 4 grands together and a bunch of happy mamas!” she wrote. “Such a dream.”

You can see the precious photo of Korie and her grandkids below. What a beautiful family!