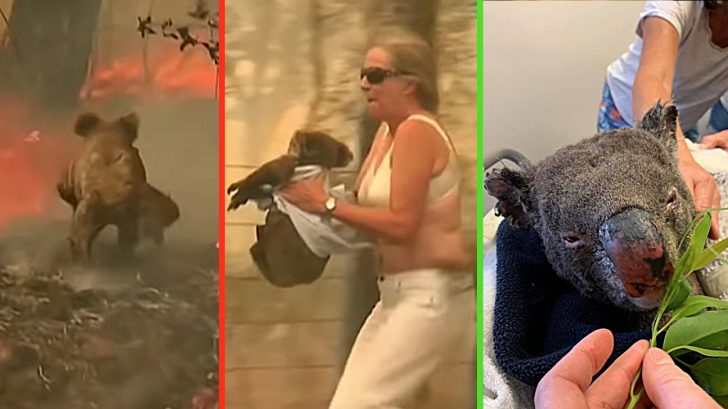 A heroic woman was filmed in New South Wales, Australia rescuing a koala bear helplessly walking around in a burning bush-fire right outside of Sydney.

They Spotted The Koala Crossing The Road

The poor thing being blinded by the smoke and not knowing where to go was spotted crossing the road only to get to the other side and walk right into more flames.

Animal rescue volunteer, Toni was driving by with a team and noticed the koala bear in distress as it stepped on hot embers and lifted up its feet in pain so they stopped the car to help it.

She bravely got out in her sandals, took her shirt off and ran over to it. At this point, the koala was trying to climb a tree an attempt to escape but before it could climb too high she wrapped her shirt around him and pulled him off the tree.

They Took The Koala To Get Medical Attention

Toni carried the koala out of the burning area to a safe spot and began pouring bottles of water on him to ease his pain. The koala whimpered in agony as another volunteer ran over with a blanket and they decided to wrap him in it and quickly took him to a nearby animal shelter.

According to Channel 9 News, the koala suffered severe burns to his nose, feet, ears and other places. So much so they had to sedate him so they could perform immediate medical attention on him.

KOALA CRISIS | Flash the koala almost perished in NSW bushfires. His burns are so severe he has to be sedated for treatment but thanks to the tireless work of volunteer rescue groups, he's on the road to recovery @9NewsSyd @nbnnews pic.twitter.com/EvUCm92zPi

Fortunately, even though the koala was burned badly in multiple spots, thanks to the team’s efforts the lucky little guy is in the process of healing and is expected to recover from his injuries. They named him Flash and posted pictures of him on Twitter to let the world know he was going to be alright.

Video From The Rescue Below