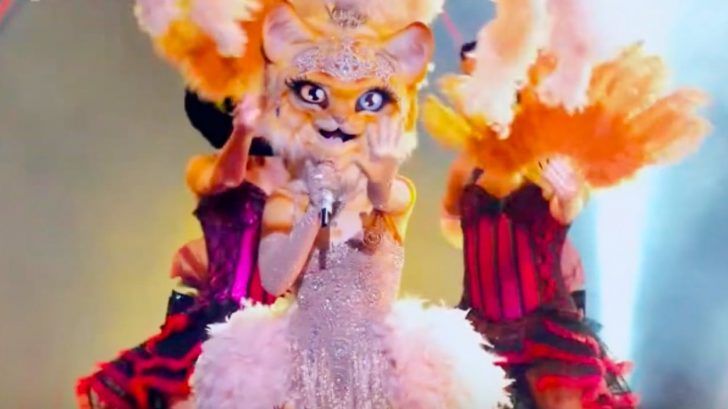 Usually it doesn’t take long for viewers to figure out the identities of the celebrity contestants on The Masked Singer. But one contestant on Season 3 had everyone stumped as to who they could be.

The contestant we’re talking about is Kitty. The fashionably dressed feline originally impressed viewers and The Masked Singer panelists with her performance of Ariana Grande’s “Dangerous Woman.”

Some people thought she could be actress Liz Gillies, while other guesses included Sarah Hyland, Emma Watson, and Jennifer Love Hewitt.

Kitty made it through that initial round of the competition, and went on to sing “Mercy” by country artist Brett Young. Once again, people couldn’t seem to figure out who Kitty was.

Kitty’s mysterious identity and beautiful voice captivated the judges, and she got to move through to the last round for her group, Group B.

She was one of four contestants who competed in this mini-finale. One of the contestants would be eliminated by the end of the night, while the remaining three would move on to the grand finale.

Kitty pulled out all the stops for the occasion, and opted to sing her second country song during her time on the show. This time, she went for something feminine and sassy…Miranda Lambert‘s “Mama’s Broken Heart.”

Released in 2013, “Mama’s Broken Heart” claimed the second spot on both the U.S. Country Airplay and Hot Country Songs charts. The song went on to be nominated for a Grammy.

Like Lambert, Kitty brought some serious attitude to her performance of the song. It impressed the judges and viewers, but they still had no idea who she could be!

The panelists threw out a variety of guesses, saying Kitty could be anyone from Kristen Bell to Christina Ricci.

As for the viewers, some reiterated their thoughts that Kitty was Lucy Hale or Jennifer Love Hewitt. Other guesses included Leighton Meester, Kate Bosworth, and Ariel Winter.

Tune in to the video below to hear Kitty sing “Mama’s Broken Heart.” She was eventually revealed to be Jackie Evancho, so some of the fan guesses were right from the get-go!