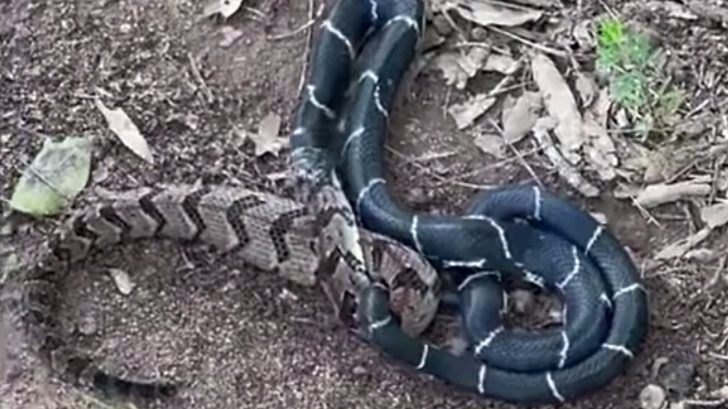 Georgia’s Department of Natural Resources and Wildlife Resources Division shared a video on social media showing the moment a timber rattlesnake lost the battle against a more dominant kingsnake.

“It’s a snake eat snake world out there,” Georgia’s Department wrote on Facebook.

The video footage was filmed by Tom Slagle from Haddock, Georgia and it showed the kingsnake eating the timber rattlesnake and had almost have of the venomous reptile consumed down its throat.

Even with the timber rattler appearing to be almost double the size in width of the kingsnake, it still continued to swallow the rattlesnake bite by bite.

“Found throughout Georgia, Kingsnakes are renowned for their ability to overcome and eat venomous snakes. They will strike and grasp prey near the head, coil around it and constrict before swallowing headfirst,” Georgia’s Department wrote.

If the snake being eaten is longer than the kingsnake, the department says it will fold its meal before it swallows it so that it will fit in its stomach.

“You can easily identify this species by the chainlink fence-like pattern on its back. This dorsal pattern is usually white or yellow in color. Video by Tom Slagle from Haddock, Georgia.”

Watch Footage Of The Kingsnake vs. Timber Rattlesnake Below