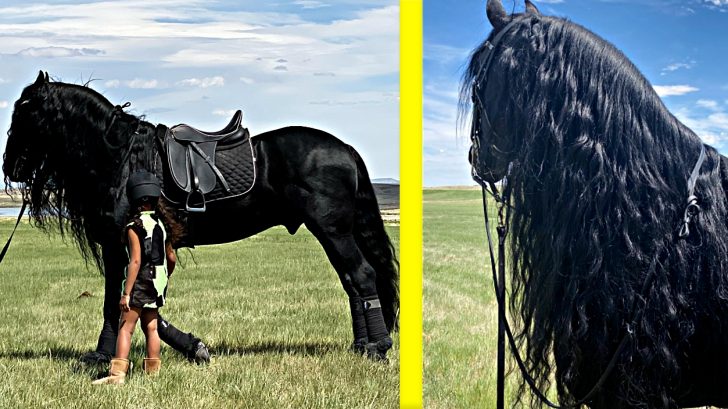 Kim took to social media sharing images of the family celebrating her eldest daughter by riding horses, go-kart racing, and just having fun on the ranch.

In a post to Twitter accompanied by two pictures, Kim revealed they had purchased North a Black Friesian Horse, and there were 14 of them living on the ranch saying:

“Meet North’s Freesian [sic] horse. We have 14 gorgeous Freesians [sic] on the ranch.”

Meet North’s Freesian horse. We have 14 gorgeous Freesians on the ranch. pic.twitter.com/TO87I25YKJ

Although she didn’t share any photos of them riding the Friesian Horse, she did share a photo of the two of them sitting atop two different horses while reaching out for each other’s hands.

The Friesian Horse is one of Europe’s oldest breeds and is native to an island located off of the Netherlands coast called Friesland. They are believed to have descended from the Forest Horse, which is a primitive breed, and evidence shows they may have been in existence as early as 1000 B.C.

They are smart, gentle, versatile, and easy to train. However, they are best suited to individuals with some level of experience.

The Friesian is distinguished by its shiny black coat and luscious long mane and tail.

Beautiful Friesian horse is also called Frísian horse and its name refers to its place of origin: Friesland or Friesland. It is undoubtedly one of the most wonderful horse breeds that exist in the world, especially for the color of its fur which attracts a lot of attention ❤️ pic.twitter.com/SCpfxuOKPA

A Friesian Horse can cost anywhere between $5000 to over $32,000 depending on age, breeder, and quality. If the Friesian is considered show quality, it could cost upwards of $50,000.

What a spectacular gift!

Watch the video of Friesian Horses below.