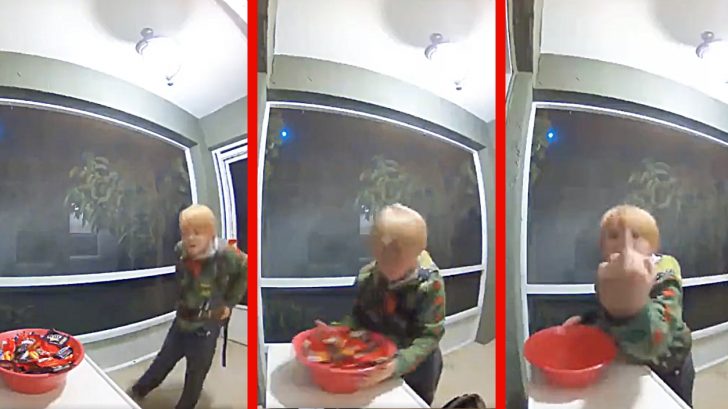 Halloween is all about trick-or-treating and one trick-or-treater two years ago went viral and is going viral again this year for stealing an entire bowl of candy and flipping off the security camera.

The video was posted to Reddit in 2020 and showed a Halloween trickster walking onto a porch, looking directly into the RING security camera, and then taking his backpack off to do something very naughty.

The kid who looked about 12 years old proceeded to unzip his backpack and grab an entire bowl of mini bags of Snickers, M&Ms, Butterfingers, and Skittles and toss the candy into his open backpack.

If that wasn’t shockingly enough, the candy-thieving kid looks at the camera again and gives the homeowner a BIG middle finger letting them know exactly how he feels about doing the dirty deed.

The video was reposted again on Twitter racking up more than 15 million views in less than 24 hours. Check out the menacing video below.

This kid is the devil, but I am rolling. pic.twitter.com/omtgvbVG1y

This kid is not the first to do it.

Others kids have done it as well and another video taken this year (2022) is also making its rounds on social media.

The video shows a kid walking up to a porch and not only taking all the candy outside but also stealing the bowl as well and running away with it.

If it wasn’t bad enough that kids are doing it, a mother was caught on camera back in 2018 teaching her kids to steal all the candy from one man’s front door.

A video showed the mother walking up to the man’s house and taking all the candy he left out for the neighborhood.

To make matters worse, she was doing it right in front of two toddlers, one of them a boy who was well aware of what she was doing and looked at the RING home security camera realizing they were being watched.

In the video, you can hear the homeowner speaking to them through the speaker letting them know that he was seeing the lady stealing as she was committing the act.

Watch A Mother Steal Candy In The Video Below