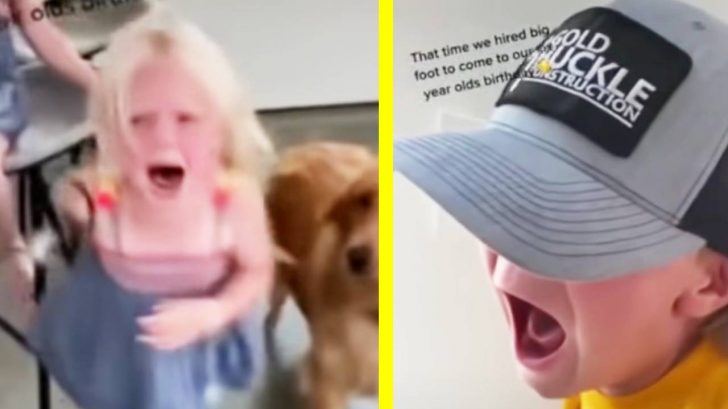 Oklahoma mom Brett McPherson usually goes “all out” for her kids’ birthday parties with a very special cake. Unfortunately, the cake she ordered fell through for her six-year-old’s birthday party so she decided to hire a character to come and entertain the kids.

Turns out, this character wasn’t your typical princess or face-painter. McPherson hired a Bigfoot to come to the party! And not just any Bigfoot, it was a Bigfoot that wears a tutu, bow, and came with balloons in tow.

“We just thought, I mean she came with balloons and a bow and a tutu, so I thought ‘oh this will be cute and fun.’ Well, my kids did not have that reaction,” Mom Brett McPherson said.

This particular Bigfoot goes by the name Cinnamon and just like McPherson said, arrived in a blue tutu and bow. Her kids’ reaction was probably not what she expected. They screamed, cried, and ran away from Bigfoot! But the footage is absolutely hilarious!

Eventually, the kids calmed down and even took a liking to the tutu-wearing Sasquatch and she’d recommend hiring this character for any birthday party just for the laughs!

The news anchors revealed that the kids ended up even giving Big Foot a hug…but they definitely don’t want to see Big Foot again.

See their hysterical reactions below.