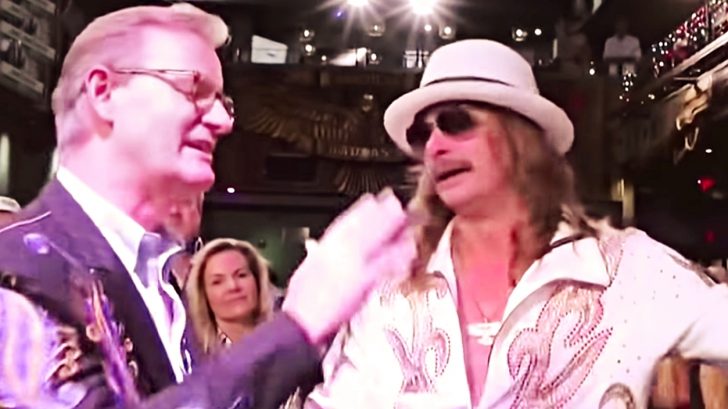 During the interview, he told Steve Doocy that “It is so hard for people just to get past that we can disagree and still be cordial with one another. You know and just talk about things without going for each other’s throats and protesting everything. And God forbid you say something wrong, [then] you’re racist, homophobic, islamophobic. This that and the other. People need to calm down, get a little less politically correct. And I would say, ya know, love everybody except that…I’d say screw that Joy Behar b****.”

Then Doocy told Rock that he cannot say the “b” word on live television and rock corrected himself to say “lady” but the show had already been aired across the nation.

He further explained that while they might have different views, “maybe I’ll go on and hash it out with her and we’ll talk about it. Aside from joking, which I was, go out and hash it out with people and have your thoughts and ideas but be able to still go have a beer with somebody. So you know, hey – we all love this country. Let’s have different ideas but try to move forward and be more together and realize at the end of the day, we’re all Americans.”

While celebrating her 20 years on The View, Behar was asked how she felt about the situation. Her ladies rallied behind her and said, “If you come for one of us, you come for all of us.” As they joked back and forth, Behar invited Rock on their show but the ladies felt he needed something a little stronger than beer to hash it out.

The ladies did bring it to the attention that the reporters handled the situation well by addressing it in the moment rather than backtracking and apologizing later.

Kid Rock responded in a few ways. One was by reposting a video he made with well-known Democrat, Sean Penn about not letting politics divide the nation and personal relationships.

Next, he used social media to reinforce his feelings towards Behar saying, “Behar has been an outspoken critic of President Donald Trump and when Myself, Sarah Palin and Ted Nugent visited The White House last year, Behar called it “the saddest day in the history of the White House since the British burned it to the ground in 1814.” Today I said “Screw that Joy Behar b****.” Mess with the bull, you get the horns. End of story. I apologized for cursing on live tv, I will not for my sentiment nor do I expect an apology from her or anyone else who has choice words for me or doesn’t like me. God Bless America. -Kid Rock”

Behar has been an outspoken critic of President Donald Trump and when Myself, Sarah Palin and Ted Nugent visited The…

Bryan Lewis, Tootsies Orchid Lounge’s attorney took to Channel 5 News to explain that if Rock was pulled from the parade, the owner planned to sue the city of Nashville over the decision. As the majority of funding came from Tootsies Orchid Lounge, Lewis felt that the city did not have the right to make calls at this level.

This all happened just days before Rock was supposed to host Nashville’s Christmas parade as the Grand Marshal. As more people watched the tapes, a few political and community leaders decided they would not support the parade if Rock was still a major player in it.

I will not be participating in tomorrow’s Nashville Christmas parade. The choice of Grand Marshal evokes neither the spirit of Christmas nor the inclusivity I think represents the best of Nashville.

In the end, Rock was replaced by James Shaw Jr. – a local hero who tackled a shooter who had entered a Waffle House the young man was in. Shaw was excited about the news and took to social media saying, “Just got some really exciting news!!!!!”

Just got some really exciting news!!!!!

At The End Of The Day

While people on both sides have had their own opinions about the situation, Kid Rock still attended the parade. He told social media, “Well folks, it is official…My parade has been rained on! But in the end, it is not about me. It is about the kids and the wonderful work they do at Vanderbilt Children’s Hospital.”

Well folks, it is official…My parade has been rained on!But in the end, it is not about me. It is about the kids and…

Despite the surrounding controversy, people from all around came to watch the parade. You can watch the parade turnout in the video below and let us know what you think in the comments.