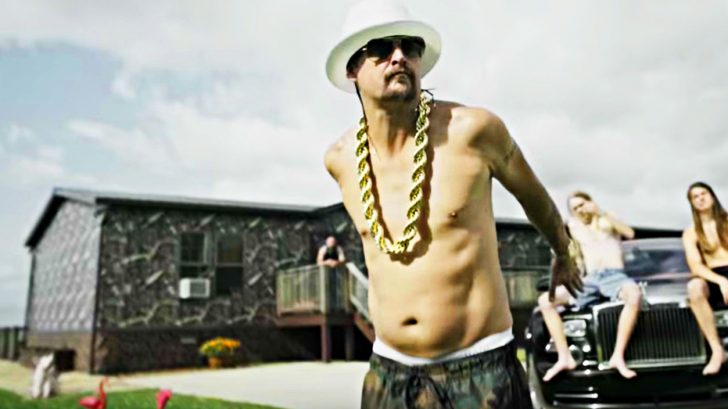 A Michigan-native with millions in the bank, this music superstar opens up about living in the lap of luxury and why he has chosen to live in a double-wide trailer instead of a mansion.

Kid Rock has been known for years as someone who pushes limits, armed with his unabashed personality, down-home roots, and Southern values – Rock has always spoken his mind and been open about his core beliefs.

Hey @KidRock Let’s do this! You’re trailer house would fit in well with my ice fishing shack! #comecheckitout @ticasino pic.twitter.com/k0XGYcrtKf

The 47-year-old rapper, singer, record producer, and multi-talented musician has turned his back on the expansive mansions and gold-plated luxury that often is seen with success like he has experienced. Worth more than $80 million, Kid Rock has instead chosen to live his years out in a double-wide trailer that, he says, suits his lifestyle much better.

“I live in a double-wide trailer. It’s not like I require a lot. You know, I’ve learned to downsize through the years and it really made me more happy. I’ll sell everything and live in that double-wide but I’m not givin’ up that airplane,” Rock said in an interview with Dan Rather.

He might live in a double-wide, but the ease and convenience of a private airplane is the one luxury item he won’t walk away from. Just beyond his spot of land and mobile home sits an airstrip just big enough for his private plane.

“No security,” Rock tells Rolling Stone of the strip. “Just drive a pickup truck onto the tarmac, leave your keys in the car, get on the plane.”

With multiple platinum albums and a discography that continues to grow every year, Kid Rock has experienced success that many aspiring musicians only dream of. With that success comes a lot of money, but that’s not a driving factor for his lifestyle.

“You see a lot of people in my business. You go to these houses and I go where do you start in this thing? Like, how many times do you use the movie theater? I’ve built one. I maybe went in there once. Usually, because I was too drunk and couldn’t find the bedroom. It’s just like a freakin maintenance nightmare.”

“I’m just figuring out what really makes me happy and I’d rather have land and things of this nature and maybe some cool cars and my plane of course and stuff like that… and really not have any worries. You don’t have to worry if things are gonna go south.”

“If that trailer burns down or blows off the mountain… order another one, it’ll be here in two weeks.”

Watch Kid Rock’s interview with Dan Rather below and let us know what you think of his double-wide – the house is featured in the second video below for his song, “Po-Dunk.”