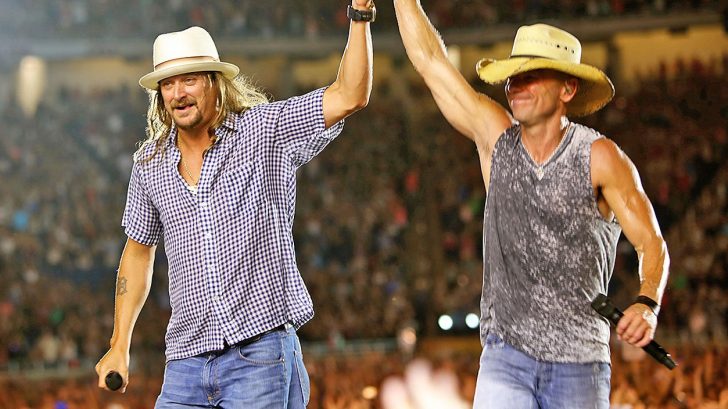 It seems at almost every Kenny Chesney show, he has surprised his fans with a superstar guest. During his tour in 2016, he brought out Van Halen rock star Sammy Hagar.

It was a rain delay in Orange Beach, Alabama, but the wait was worth the wetness. Not only did Kacey Musgraves and the…

At his August 12, 2016 show in Detroit, Michigan, Chesney once again shocked his fans when he brought out a musician who happens to be from Detroit.

He introduced this special guest, as “One of my dearest friends in the world. He is my brother in music and life. He is from Detroit, Michigan.” Once the crowd heard he was from their hometown, they went crazy!

“Please welcome Kid Rock!” Chesney announced. The audience couldn’t handle it! Kid Rock walked on stage and the cheering from the audience actually hurt our ears! They began singing Kid Rock’s “Cowboy” together and you can hear the audience singing along loudly in the background. They were absolutely loving it!

Every city loves seeing people from their hometown make it big, but it seems no one is more proud of Kid Rock than Detroit. What a memorable night for all!

We didn’t want this performance to end. Watch it below.