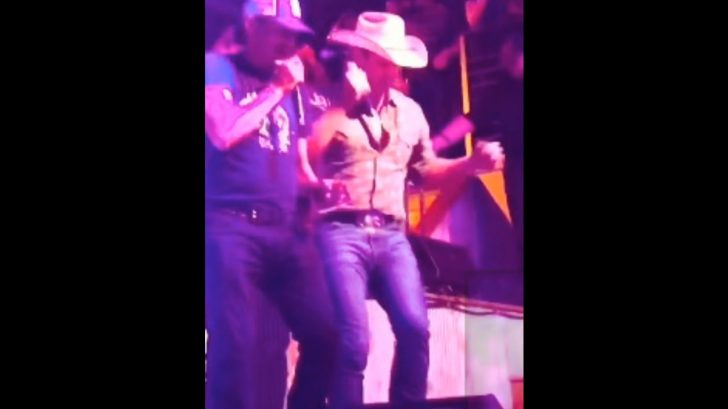 Anyone who has ever been to CMA Fest in Nashville knows that it is one big party. All of country music’s hottest artists roll into town for the week, which means that surprise collaborations between stars happen throughout the festival.

One surprise collaboration didn’t take place on any of the festival’s main stages, but was still one of the most entertaining get-togethers of the entire week. It all went down when Jon Pardi and Kid Rock united on the stage at Kid Rock’s Big Ass Honky Tonk Rock N’ Roll Steakhouse on Broadway.

It appears that the pair had a fun time performing together, and much to the crowd’s delight, they sang more than one song.

One of the songs they sang was the beloved classic “My Girl” by The Temptations. The two also accented their performance with a little spontaneous line dance, and they were getting into it!

Who knew that Kid Rock had such smooth moves? We fully expected that Pardi would know how to line dance, but Kid Rock’s skills surprised us!

That wasn’t the only time that one of the singers started dancing on stage. Later, when the pair was performing Pardi’s hit song “Head Over Boots,” Pardi started grooving a little bit while Kid Rock belted out the song on the other side of the stage.

It’s clear that Kid Rock is a fan of Pardi’s music, because he knew all of the words and was singing loud and proud! You can watch part of that performance in the video below.

This collaboration between Kid Rock and Pardi was something we never knew we needed, but now we’re so glad it happened!