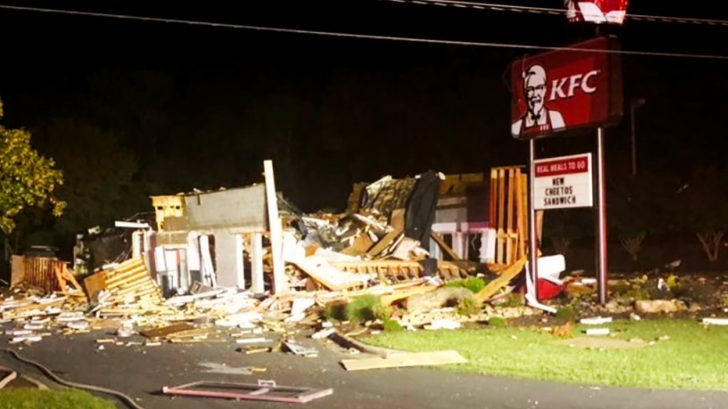 Those who visited a certain KFC location in Eden, North Carolina on Wednesday (July 10) had no idea they’d be some of the last people to see it before it would be destroyed.

In the middle of the night on Thursday (July 11), that KFC restaurant exploded. Police responded to the explosion some time after 1AM that night.

Investigators say no one was inside the restaurant at the time of the blast. That’s a good thing, because the restaurant was reduced to rubble. The only thing left untouched was the tall KFC sign out front.

North Carolina news station WCNC reports that nearby businesses were also affected by the explosion. According to the station, at least three surrounding businesses suffered damage, including busted and broken windows.

Debris from the explosion spread across the parking lot and some debris were even found on the nearby highway. The picture Eden police shared following the explosion shows just how extensive the damage was.

Eden Fire and Eden PD are on scene on Highway 14 in Eden at Kentucky Fried Chicken due to an explosion. Officials are early in their investigation and there are no further details at this time.

At the time that photo was posted, the Eden PD said that officials “[were] early in their investigation and there are no further details at this time.”

A report published on Thursday morning by North Carolina news station WSPA states that “police haven’t said what may have caused the explosion.” Fox 5 News reports that employees informed the Eden PD they thought they smelled gas before closing the restaurant, and that the manager had attempted to shut off the nozzle and called the gas company.

You can see the full extent of the damage by tuning in to WCNC’s video from the scene below.

All lanes of the highway surrounding the restaurant will remained closed so police can continue to investigate the cause of the mysterious explosion. Hopefully they figure it out soon!