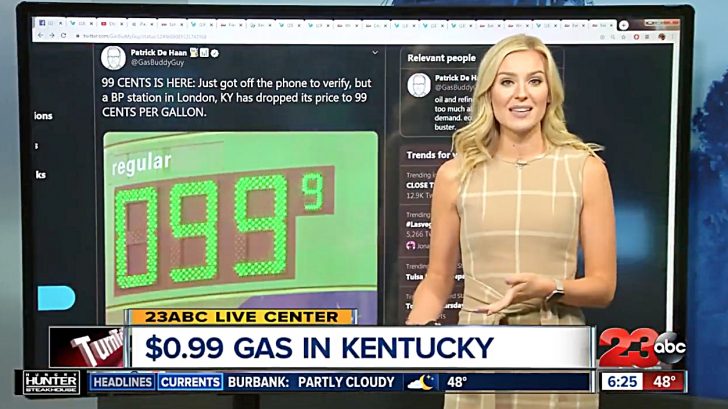 An app called GasBuddy shows people where the cheapest gas is in whatever area they happen to be traveling through, and on Wednesday (March 18, 2020) the app showed a gas station in London, Kentucky selling gas for 99 cents a gallon!

Wow! I remember when I was a teenager, and it was 18 cents a gallon during gas wars. This story is from Kentucky."…

The last time the average price of gas was below a dollar in America was in 1988, according to Energy.gov, so it was very shocking for drivers to see a price this low.

The gas station selling gas for 99 cents is called Spur 7 BP and is located on state route 25. Fox News Autos reached out to an employee who worked at the station to confirm if it was true and they said it definitely was true. However, the employee also said that people should not waste their time traveling there to purchase the gas because it had already sold out.

The station is currently waiting to be restocked with gas and they’re not sure when the pumps will be refueled again. Commenters who use the GasBuddy app say that this gas station is well known for its cheap gas, but this was definitely the lowest they’ve ever seen.

According to Fox News, the reason why gas prices are so low is because Saudi Arabia and Russia have a massive amount of gas stored away, ready to sell. However, due to the coronavirus pandemic, the demand for gas right now is extremely low and that’s what’s making the price drop.

Kentucky isn’t the only state that is experiencing incredibly low gas prices. Tennessee, Mississippi, Kansas, and Oklahoma also have gas stations that are selling gas at an all-time low of $1.30.

Gas prices drop below one dollar

Gas prices are WAY down across the country! According to GasBuddy, a station in Kentucky had gas for 99 CENTS per gallon this morning (it already sold out!) In Bakersfield, many gas stations are below $3/gallon.