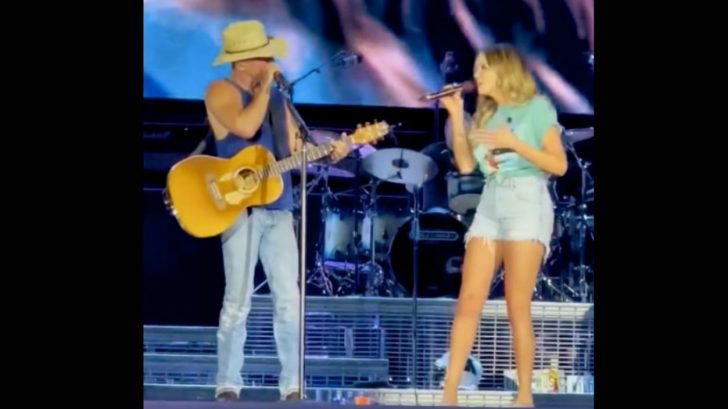 Kenny Chesney is finally on tour again after a few years away from the road. His current trek is called the Here and Now Tour.

The tour first took Chesney to Tampa, Florida. “To all 60,000 of you who filled @rjstadium with light, thank you from the bottom of my heart. We’re just getting started,” Chesney wrote on social media after the show.

Reigning CMA Female Vocalist of the Year and Grand Ole Opry member Carly Pearce is one of Chesney’s openers on the tour. During his recent show in Charlotte, North Carolina, Pearce surprised the crowd by joining Chesney onstage for a duet.

The pair sang “You and Tequila,” which Chesney released in 2011. His recording featured Grace Potter as a guest vocalist. It reached the third spot on the Hot Country Songs chart and has been certified Platinum.

Chesney revisited “You and Tequila” back when he toured with his good friend Miranda Lambert in 2016.

He didn’t sing “You and Tequila” during the opening night of the Here and Now Tour. But he added the song to his setlist when he sang at the Bank of America Stadium in Charlotte, and got Pearce to join him.

Chesney told the crowd he added the song to the show per his mama’s request:

“We’re changing stuff with the setlist, and we didn’t do this last week, but my mama is here tonight from Knoxville, and she wanted to meet Carly Pearce,” he said. “So, Carly came up on the bus. And my mom goes, ‘Are you going to sing with Kenny tonight?’ I went, ‘You know, probably be a good idea.’ So if you don’t mind, Carly please come out.”

Chesney and Pearce shared a hug while the crowd cheered. Then, they moved into their performance of “You and Tequila,” much to everyone’s delight.

A fan account for Pearce uploaded a video of their duet on Twitter, and Pearce retweeted the clip. You can watch it below.

We have to thank Chesney’s mama for suggesting that he sing a duet with Pearce!