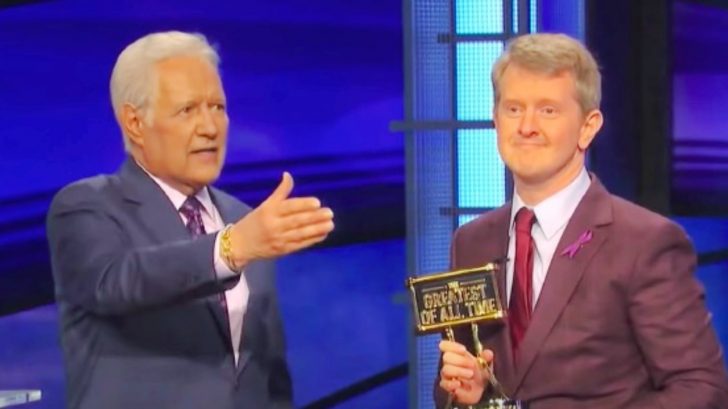 On November 8, Jeopardy! host Alex Trebek passed away following a long and courageous cancer battle. Members of the Jeopardy! family mourned his death, including the man who is the most famous contestant in the show’s history…Ken Jennings.

Jennings first competed on the show in 2004. He went on to win 74 consecutive games, and earned a total of $2,520,700 for those wins. To this day, Jennings holds the record for the most consecutive wins on the show.

He earned more money by competing on other game shows and various editions of Jeopardy! Most recently, he competed in the Jeopardy! “Greatest of All Time” tournament earlier this year, and won the $1 million prize. In doing so, Jennings became the highest-earning American game show contestant of all time (he previously held the record twice before).

After being such a prominent member of the Jeopardy! family for so long, Jennings was surely devastated when he heard Trebek passed away. He remembered him on Twitter:

“Alex wasn’t just the best ever at what he did,” Jennings wrote alongside a photo of him and Trebek taking a selfie together. “He was also a lovely and deeply decent man, and I’m grateful for every minute I got to spend with him.”

Alex wasn’t just the best ever at what he did. He was also a lovely and deeply decent man, and I’m grateful for every minute I got to spend with him. pic.twitter.com/CdHCcbqmp2

Trebek had enough episodes taped in advance to give Jeopardy! time to find a new host. But as the show transitions into operating without Trebek, they’ve decided to keep things in the family for a while to make things a little easier.

So it was announced that Jennings will step in to serve as the first interim guest host of Jeopardy! following Trebek’s death:

“By bringing in familiar guest hosts for the foreseeable future, our goal is to create a sense of community and continuity for our viewers,” said the show’s executive producer Mike Richards, as quoted by E!

Production will resume on November 30, which is when Jennings will begin his tenure as the show’s temporary host. His episodes will start airing the week of January 11, 2021.

“There will only ever be one Alex Trebek, but I’m honored to be helping Jeopardy! out with this in January,” Jennings said on Twitter about him taking over as interim host.

There will only ever be one Alex Trebek, but I'm honored to be helping Jeopardy! out with this in January. https://t.co/2m2b5IQnkw

Jeopardy! has promised that more guest hosts will follow in Jennings’ footsteps. They will be named at a later date.

In honor of Jennings’ new hole as the temporary host on Jeopardy!, check out the below clip about when he won the “Greatest of All Time” tournament earlier this year.