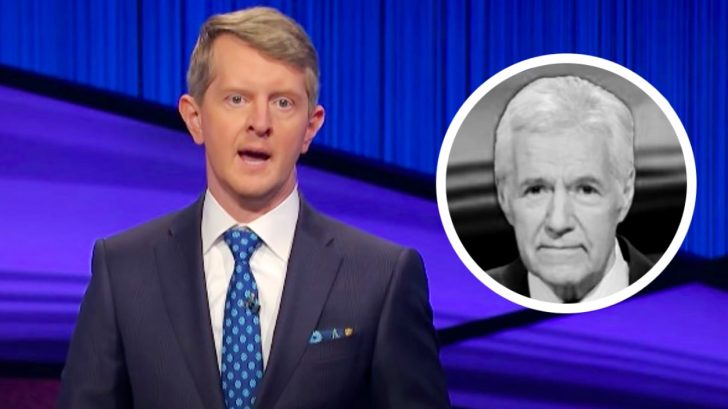 Although Alex Trebek passed away in November, he had pre-filmed enough episodes of Jeopardy! to last into January.

After Trebek’s last episode aired, Jeopardy! champion Ken Jennings took over as a guest host starting on January 11. On his first episode as host, he addressed Trebek’s passing and the legacy he left behind.

Jennings’ eyes filled up with tears and his voice began to break as he said.

“Like all ‘Jeopardy!’ fans, I miss Alex. Very much. And I thank him for everything he did for all of us.”

Since then, Jennings has continued to honor Trebek with a short message at the end of every show. Viewers picked up on the fact that during his sign-off, Jennings always says “Thank you, Alex.”

After many fans commented on how much they love the simple tribute, Jennings explained where it came from.

Taking to Twitter, Jennings said the “Thank you, Alex,” sign-off wasn’t his idea. Instead, he said it was the show’s executive producer, Mike Richards, who thought of it.

“‘Thanks, Alex’ was suggested as a sign-off by executive producer Mike Richards, and I’m glad he did. There wouldn’t be a show without Alex,” Jennings wrote.

"Thanks, Alex" was suggested as a sign-off by executive producer Mike Richards, and I'm glad he did. There wouldn't be a show without Alex. https://t.co/dFIwemd8be

Jennings is just the first of many guest hosts who will lead Jeopardy! in the coming months. Other celebrities who will take the helm include Katie Couric, Aaron Rodgers, and Mayim Bialik.

Hopefully all the future guests hosts will follow Jennings’ example and will also sign off the show with a tribute to Trebek.