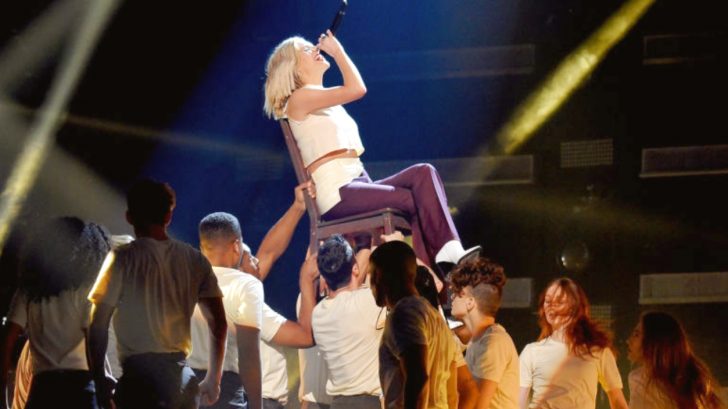 On November 3, 2017, country star Kelsea Ballerini released her sophomore album, Unapologetically. The album reached the third spot on the Country Albums chart, and snuck into the top ten on the all-genre chart.

The album’s lead single, “Legends,” has been its biggest success. Following its release in the summer of 2017, the song topped the Country Airplay chart and reached the ninth spot on the Hot Country Songs chart.

In addition, the song was a crossover success, reaching the 68th position on the all-genre Billboard Hot 100.

The second single Ballerini released off of Unapologetically was “I Hate Love Songs.” Although not as successful as its predecessor, the song still managed to reach the 25th spot on the Country Airplay chart.

As Ballerini made the awards show circuit during the spring and summer, “I Hate Love Songs” was her go-to piece. She performed it at the CMT Music Awards in June, but her most memorable performance took place at the ACM Awards in April.

Ballerini made a grand entrance for her performance, floating down to the stage on a giant neon heart.

But when it came time for her performance at the CMA Awards on Wednesday night (November 14), Ballerini had a new song to share. And much like “I Hate Love Songs,” this new song takes the topic of love and addresses it with the perfect dose of sass.

Titled “Miss Me More,” Ballerini’s latest single is her third release off of Unapologetically. The fiery track hit country radio in October, and is already fighting its way up the charts.

Although “Miss More More” is a breakup song by simple definition, you won’t hear Ballerini singing the blues in it. Instead, she takes the typical theme and flips it, saying how she thought she’d miss her ex after they parted ways, but realizes she doesn’t.

Instead, she misses the person she was before she ever started a relationship with the unnamed man.

Bringing “Miss Me More” To The CMA Awards

Since “Miss Me More” is fairly new as a single, many fans got the chance to hear it for the first time when Ballerini performed it on the CMA Awards. Those watching the ceremony soon realized that the song’s feisty nature comes out even stronger live.

Ballerini was joined by background dancers, who used chairs as props throughout their performance. They were all dressed in black and white to match Ballerini, adding even more to the song’s dramatic vibe.

Every now and then, Ballerini even joined in on the dancers’ routine. You go girl!

Want to catch Ballerini’s CMA Awards performance again? Then be sure to tune in to the video below.

She put so much personality into it!

Thanks to @Morgan_Evans, we'd like to claim @KelseaBallerini as an honorary Aussie! #CMAawards pic.twitter.com/dB4idZXYaR