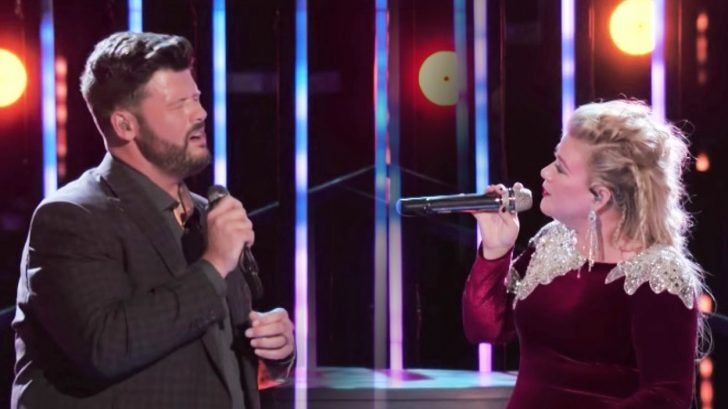 During the last results show before the finale, The Voice treated fans to a night filled with incredible performances, and nail-biting eliminations.

But before host Carson Daly revealed who would be advancing the the Top 4, coach Blake Shelton performed his latest single “God’s Country.”

Another performance that took place before the Top 4 reveal was a duet between coach Kelly Clarkson and her last remaining team member, Rod Stokes. Together they sang the Bob Seger and Martina McBride song “Chances Are,” which was made famous thanks to the movie Hope Floats.

The music video for “Chances Are” featured Seger and McBride singing in a dark room, as well as footage from the movie playing on the piano the rock legend is playing and the wall behind them.

Starting out on a dark stage, Stokes began the duet solo, showing off his Southern twang and rich tone. After singing a few phrases to the audience, he turned towards Clarkson, who was just watching in awe before her part began. Clarkson sang a verse solo, and they came together in harmony to sing the chorus, blowing the audience away with how well their voices sounded

Unfortunately, this performance, and his Instant Save song, weren’t enough to keep him around for the finale. And for the first time ever, Clarkson doesn’t have any singers in the finale.

Check out their duet in the video below.