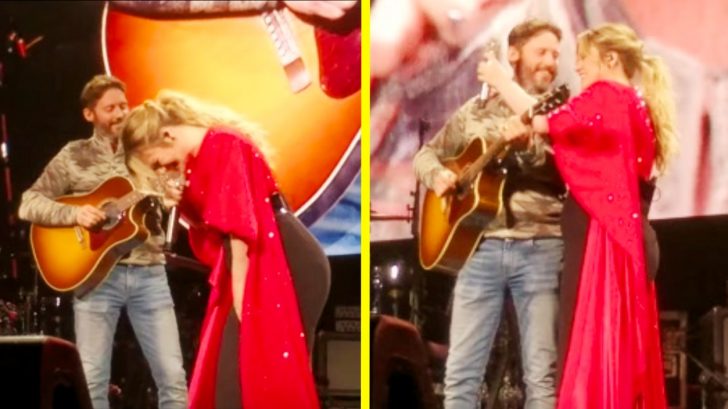 Kelly’s Song Brings On The Tears

Kelly Clarkson has penned her fair share of emotional songs over the years, but none get the tears flowing as much as her 2015 track “Piece by Piece.”

The song has Kelly reflecting on how she was abandoned by her father at a young age, and how her now ex-husband, Brandon Blackstock, helped restore her faith in husbands and fathers “piece by piece.”

“Piece by Piece” had already been out in the world for a few months when a then-pregnant Kelly appeared on the final season of American Idol before the reboot. For those of you who don’t know, Kelly found her claim to fame as the first winner of the competition series, so her return to the show was an emotional one.

Kelly opted to perform “Piece by Piece” that night, but found herself struggling to get through the song as she broke down in tears.

She wasn’t the only one crying though. The audience members were all misty-eyed, and judge Keith Urban was famously shown crying just as hard as Kelly was.

The Idol performance was so well-received that Kelly’s team decided to release a new, “Idol version” of the song for people to enjoy as well as the official single.

Fast forward to today, and Kelly is conquering the entertainment world as a coach on The Voice and the host of a new talk show. In 2019, she was traveling around the country for her Meaning of Life Tour, and of course, “Piece by Piece” is part of the setlist.

A Surprise That Stopped Kelly In Her Tracks

It was always a guarantee that “Piece by Piece” would bring most members of Kelly’s audience to tears. But the emotions were at an all-time high when she performed the song in Greenville, South Carolina in March 2019.

As Kelly was singing Brandon, came on stage behind her playing a guitar. Even though the audience started cheering as soon as they saw him, Kelly was completely oblivious to the fact that he was there.

But once she finally turned around and caught sight of him, she had a priceless reaction.

@kelly_clarkson and her husband @BBlackstock give me hope, and makes me believe in a successful loving marriage! This was the best way to end the #MeaningOfLifeTour pic.twitter.com/Y4cxjYZYDT

She Struggled To Continue

Completely taken aback, Kelly tried to keep singing but found herself unable to do so. She lost it as soon as she saw Brandon standing there, and worked to regain her composure before addressing the crowd.

“This is my husband,” Kelly said with a giggle, while the crowd cheered.

Kelly was able to pick the song up where she left off, but she found herself breaking down again a couple of times. She then closed off her performance by leaning in and giving Brandon a kiss, much to the delight of the crowd.

You can watch the entire performance below.

Sadly, Kelly filed for divorce from Brandon in June 2020. They were married for six years and share two children, River Rose and Remington Alexander.