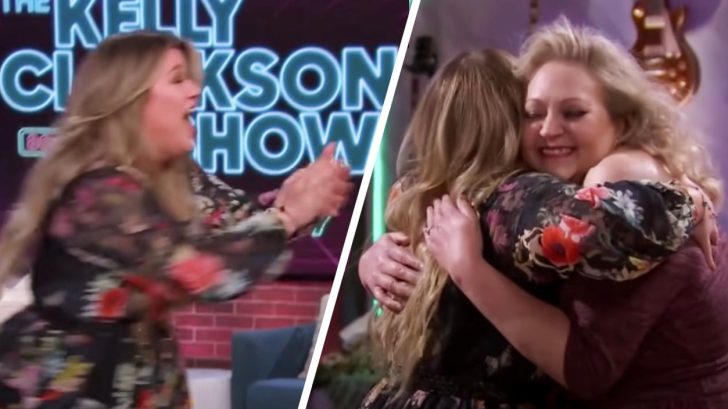 During one episode, Kelly performed Stevie Nicks‘ “Edge of Seventeen” after receiving an anonymous request to cover the song.

Kelly later learned who wanted to hear her sing “Edge of Seventeen.”

While addressing the audience, Kelly said she had “no idea” what was about to happen, since her team had a bunch of birthday surprises in store for her. One of the surprises her team had waiting for her was a special guest…the very person who requested to hear “Edge of Seventeen.”

Kelly called on that special guest to make themselves known. That’s when a woman strolled out on stage, prompting Kelly to shout, “Oh my God!”

It turns out the woman was Kelly’s childhood best friend, Mary!

Kelly rushed forward to hug Mary and welcomed her to the show. She told the crowd they “go all the way back” to the second or third grade, and they bonded in church.

Mary said she wanted to hear Kelly sing “Edge of Seventeen” since she had known her from that age…and even earlier. As Mary spoke, pictures flashed up on the screen showing her and Kelly over the years. They’ve made lots of memories together!

Kelly talked about how the two of them would often get in trouble together in school. So they were never allowed to be in the same class!

Mary also spoke about all of the milestones Kelly’s been there for in her life. She stood by her side at her wedding, and was also there for her when she was experiencing a number of different health issues.

You can tell how much Kelly and Mary treasure their friendship. Watch Mary surprise Kelly on the set of her talk show by tuning in to the clip below.

We hope Kelly had the happiest 40th birthday!