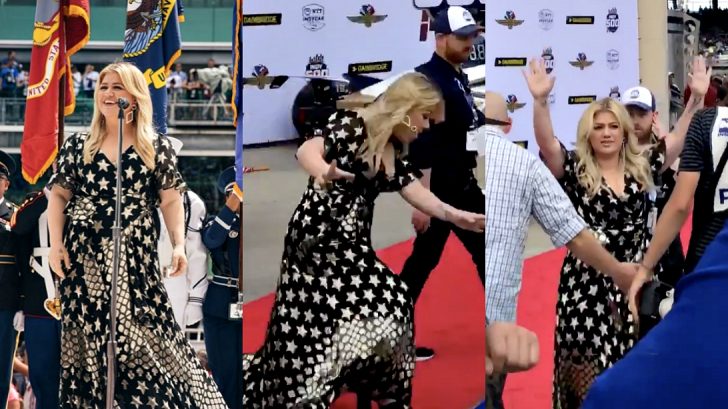 Kelly Clarkson is known for many things, but perhaps she is most loved for her sense of humor and grace under pressure. Those traits were on full display when Clarkson stumbled in front of fans prior to the Indy 500 on Sunday (May 26, 2019).

The American Idol champ was walking the red carpet on her way to sing “The Star-Spangled Banner” when she nearly tumbled. A fan shared a video of Clarkson walking the red carpet in heels then tripping before catching herself. The Voice coach turned around to see what caused her to trip before raising her arms in the air then offering a curtsy to let onlookers know that she was okay.

Graceful recovery @kellyclarkson ? day is made that I got to see you!!!! #Indy500 pic.twitter.com/i1rIHwb6YP

Kelly Clarkson later took to Twitter to share the video and called herself “utterly not cool.” But, we whole-heartedly disagree! Clarkson overcame the near- disaster with grace and was willing to laugh at herself. That alone makes her super cool in our book!

???? best part of my day is always revealing to people that might not know how utterly not cool I am. That damn crack was hidden by the carpet man! #Indy500 https://t.co/ukYBf0acZQ

Clarkson went on to deliver a flawless rendition of the national anthem to kick off the Indy 500. Her performance was praised as one of the best renditions of the anthem many have ever heard.

Hear Kelly Clarkson sing “The Star-Spangled Banner” in the video below.