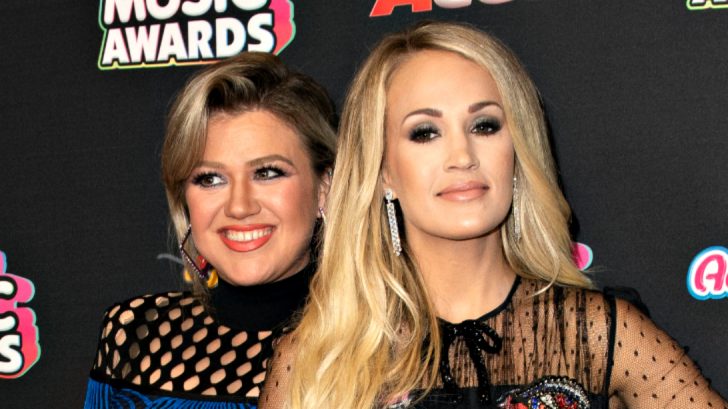 Carrie Underwood and Kelly Clarkson have something in common that no other artists do. They both won American Idol and are the show’s greatest success stories. But, with that success has come a lot of criticism, and more often than not they two Idols are pitted against each other. But, that competition is only in the headline.

In real life, Clarkson and Underwood have nothing but love for each other. In recent years, the two have tried to put an end to the rumors of rivalry, but the rumors still swirls. So, Kelly decided to take a very bold approach to publicly show how she really feels about Carrie Underwood.

While walking the red carpet on Friday at the Radio Disney Music Awards in Hollywood, California, Clarkson saw the American Idol Season 4 winner on the carpet and took her by the hand in front of photographers. Together the two posed for photos together for the first time, all while smiling and laughing and showing that they really do love each other.

36-year old Clarkson, who won American Idol Season 1, told ET‘s Katie Krause about her decision to walk the carpet with Carrie and seemed surprise at the response from fans.

“Everybody always tries to pit me and Carrie against each other,” she said. “So, when I saw her I was like, ‘You know what? Let’s just end this right now and get a picture together because we are never in the same place.’ And, like, it never happens. And people always try to put it together like we’re enemies. And I’m like, ‘We don’t even know each other well enough to be enemies.’ So, anyway, I went to get a picture and then everybody lost their mind.”

See some of the photos below.

Both Clarkson and Underwood were attending the awards show to perform and receive awards. Clarkson received the Icon Award for transcending pop music. Underwood received the Hero Award for her charity work and numerous humanitarian efforts.

Now that our minds are at rest about a Kelly Clarkson and Carrie Underwood feud, is it too much to ask for a duet? We can only imagine that a collaboration between the two powerhouses would be one of the most epic in recent history. Do you agree?