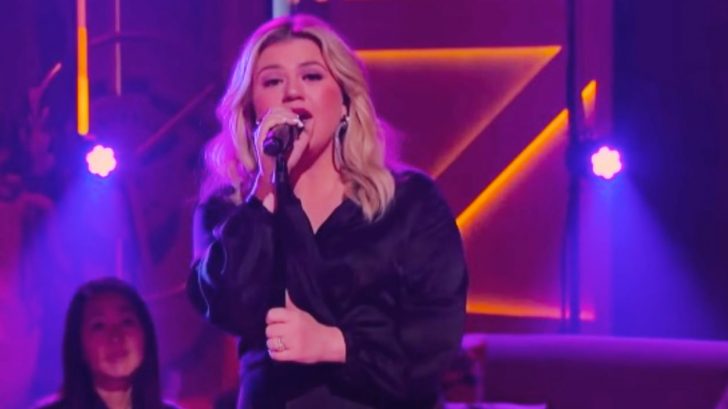 As Kelly Clarkson chooses songs to perform for the “Kellyoke” segment of her talk show, she plucks pieces from all genres.

Country music has often been showcased, as Clarkson has performed songs by Garth Brooks and Carrie Underwood, to name a few.

The move into the New Year meant it was time to prepare a new batch of covers. Clarkson picked an iconic country song as one of her first “Kellyoke” pieces of 2020…Deana Carter‘s “Strawberry Wine.”

Carter was only 30 years old when “Strawberry Wine” was released in 1996. The song instantly put her on the map, as it hit the top spot of the Hot Country Songs chart.

In addition, the song claimed the 65th position on the all-genre Billboard Hot 100.

Like she does for all of her “Kellyoke” covers, Clarkson took “Strawberry Wine” and offered her own take on the song. Even then, her take on “Strawberry Wine” was still pretty true to the style and feel of Carter’s original recording.

Clarkson sang at a standing microphone that was placed in the middle of her studio audience. Several people could be seen mouthing the words to the song while she sang, while others swayed to the beat of the music.

Those watching at home were also impressed with Clarkson’s rendition of the song. See a few reactions to her performance below.

Now it’s your turn. Check out Clarkson’s “Kellyoke” performance of Carter’s “Strawberry Wine” in the video below.

After hearing this, we can’t wait to see which country song Clarkson decides to sing next! Which song do you think she should choose?