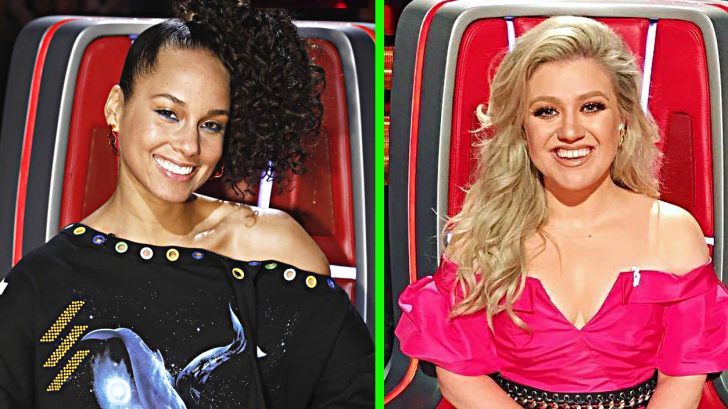 Oftentimes, we usually know who will be coaching an upcoming season of The Voice while a current season is in swing. Sometimes, we even know the lineup of coaches multiple seasons in advance.

Currently, The Voice is in the midst of Season 14, but blind auditions have already started taping for Season 15. Since the blinds have started, that means that the show also has the season’s coaches all picked out!

It was basically a given that Blake Shelton and Adam Levine would return to coach the 15th season of the show. They’ve been there since the beginning, and things just wouldn’t be the same without them!

While everyone assumed that Shelton and Levine would be returning, the plans of current coaches Kelly Clarkson and Alicia Keys seemed to be a bit more up in the air.

Season 14 marks the first time that Clarkson has ever coached The Voice, and she has fit right in. Viewers have loved her, noting how her bubbly personality brings a fun vibe to the show.

The current season also marked the return of Keys, who previously coached Seasons 11 and 12, and won with Chris Blue during the latter. After saying she would not be returning, Keys surprised everyone when she came back for Season 14.

Keys is also beloved by viewers. She is consistently praised for her kind and caring personality, which makes her a calming presence the show’s contestants need.

Finally, on Thursday (May 10), The Voice made a big announcement that revealed who else will be joining Shelton and Levine as coaches for Season 15. The announcement confirmed that one fan-favorite female coach from the current season will return, while another will depart.

Fans of Clarkson as a coach can rejoice, because she’s all set to continue her coaching duties for Season 15! However, Keys will be bowing out for the upcoming season to make way for Jennifer Hudson, who coached during Season 13.

Hudson made the announcement by taking Clarkson’s phone and sharing a video to her Instagram.

The Voice later confirmed the news on Facebook, sharing an image showing all of the coaches for Season 15.  That’s one talented lineup of singers!

Coaches we'd turn our chair for. This fall. ✨

In case you didn’t know, both Clarkson and Hudson were former contestants on another singing competition series, American Idol. It will be interesting to see how they use their experiences to coach Season 15’s contestants!

What do y’all think of The Voice‘s announcement? Are you sad to see Keys go? Hopefully she’ll return for another season!