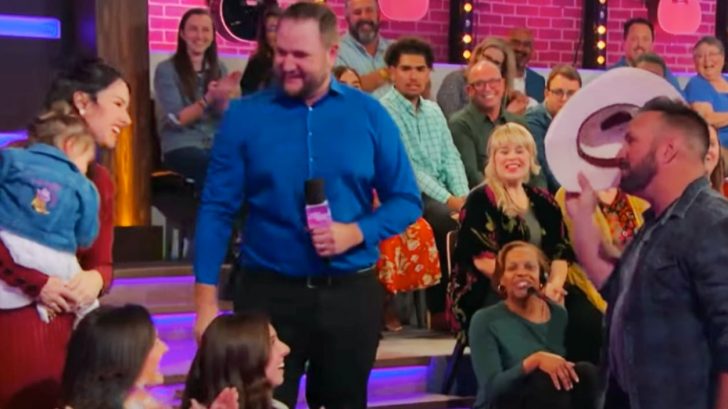 During a show at The Forum in Los Angeles in 2017, Garth Brooks stopped his concert when he spotted a couple’s sign in the crowd. The sign read, “Working on a full house. Girl? Boy?” in reference to Garth’s chart-topping song, “Two of a Kind, Workin’ on a Full House.”

The sign was held by Wes and Katy Hansen. They just found out the gender of their first child, and wanted Garth to share it so they could be surprised.

Garth was happy to do so, and took the envelope from Wes and Katy that revealed their baby’s gender.

Before Garth opened the envelope, he asked if they had any names picked out. The couple said they had chosen “Brooks” as their child’s name, whether they were having a girl or a boy.

Then, Garth shared the happy news they were having a little girl by saying, “I got to tell you, I’m extremely happy for you, because I have three of these.” Of course, Garth was referring to his three daughters: Taylor, August, and Allie.

The elated couple celebrated as Garth made a promise to them. “We’ll make a deal,” Garth said. “If I’m still alive when Brooks goes to college, we’ll pay for her college.”

Little did Garth know, he’d one day get to meet baby Brooks…and in one of the most unexpected places!

Garth was a recent guest on The Kelly Clarkson Show, and Kelly had people in the audience stand up to speak to the country superstar. It turns out that Wes, Katy, and baby Brooks were in attendance, and Kelly gave them the chance to address Garth.

As soon as they stood up, Garth knew he recognized the Hansens from somewhere. “I know you!” he proclaimed.

The couple started telling the story about their gender reveal, and Garth’s eyes grew wide as he realized that Katy was holding baby Brooks in her arms. “This is her? Is that Brooks?”

Garth then walked over to the Hansens and shook Wes’ hand, saying, “She’s so sweet, congratulations…she is beautiful.”

You can watch Garth meet baby Brooks by tuning in to the video below. He starts speaking to the Hansens around the 1:30 mark.

After they talk to each other, Kelly plays a short clip from Wes and Katy’s gender reveal at Garth’s 2017 concert. Be sure to watch that too!