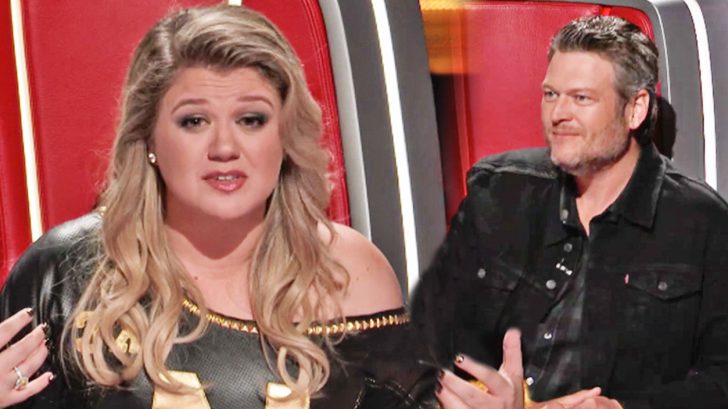 The 14th season of The Voice was one of the best yet, bringing back veteran coaches Adam Levine, Blake Shelton, and Alicia Keys, and welcoming newcomer Kelly Clarkson.

helton was the reigning champ, and has won the most out of any coach, so everyone is trying their hardest to take him down a notch – and Clarkson wholeheartedly believes she’s the woman to do it.

There are always an influx of country singers who audition for the show, which gives Shelton an advantage being the only country-singing coach in the cast. Last season, Miley Cyrus gave him a run for his money, but he still came out the victor.

Clarkson, who hails from Fort Worth, Texas and resides in Nashville, Tennessee, put her best boot forward!

“I am a country girl,” she said in the promo. “But I know Blake is gonna be like, ‘She’s knows nothin’ about country music!”

As she was quoting Shelton, she did a very thick and over-the-top Southern accent, which made Shelton himself crack up.

As the video continued, Shelton looked as though he was trying to win over an artist and said, “Nobody else has brought a country artist to the finale,” but Clarkson was quick to point out, “That’s ’cause I haven’t been here!”

“People believe that if you’re country on this show, that Blake can help you, but I have had no help from Blake and I have been successful in country music,” she said with some major sass.

Although Clarkson is defined as a pop singer, she has deep ties to country music. Her former mother-in-law, and the grandmother of her children, is none other than Reba McEntire! She and Trisha Yearwood recorded a duet in 2014, and she has a number one country song with Jason Aldean, which won Single of the Year and Vocal Event of the Year at the 2012 ACM Awards as well has received numerous other nominations throughout the year.

We are loving the sass from Clarkson in these Voice promos. Watch the hysterical – and sassy – video below.

The Voice: Queen of Country

Posted by The Voice on Wednesday, February 7, 2018