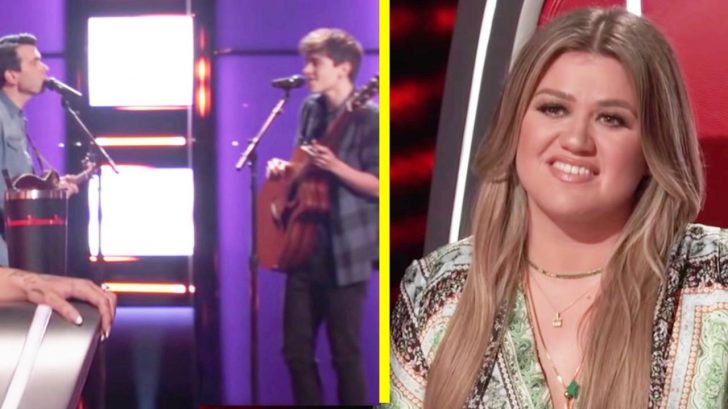 Season 21 of The Voice is proving to be one of the most interesting yet…and the father-son duo Jim and Sasha Allen is one of the reasons why!

During the second episode of The Voice, dad Jim and his son Sasha walked on the famous stage and put their best foot forward to join one of the four teams. Singing John Denver’s famous hit “Leaving On A Jet Plane,” the younger Allen sang lead vocals while playing guitar. The coaches’ faces looked pleased with what they were hearing, but once Jim joined in with harmonies and mandolin, Blake Shelton, Ariana Grande, John Legend, and Kelly Clarkson looked pleasantly surprised.

By the end of their performance, two coaches had turned their chairs for the duo – Kelly Clarkson and Ariana Grande. It was clear that the father and son were hoping Shelton would have turned, seeing as Sasha drew a picture of him, Jim, and Blake and gave it to him. Once Grande turned, Sasha also got visibly excited, which worried Clarkson.

But, Clarkson had to be “transparent” with Jim and Sasha, and told them she already has a trio, but she’d love to work with them as well.

Although they sang a country-pop song, they said they weren’t constrained After a little pow-wow with each other, Jim and Sasha revealed they would be joining Team Ariana, turning down Clarkson.

We can’t wait to see what they have in store! Watch their audition below.