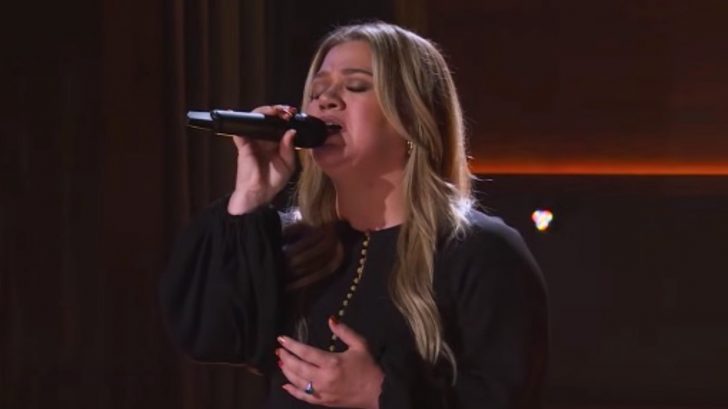 Kelly Clarkson loves covering country songs during the “Kellyoke” segment of her talk show, The Kelly Clarkson Show. She often performs songs that were released in the 90s when she was growing up.

One song Clarkson performed for “Kellyoke” was Faith Hill‘s 1999 single, “Breathe.” Clarkson was 17 years old when the song was released.

“Breathe” was a massive hit for Hill. It reached the #1 spot on the Hot Country Songs chart, the Adult Contemporary chart, and the Adult Top 40 chart. The song also crossed over to claim the #2 slot on the all-genre Billboard Hot 100 chart.

Hill won the Grammy Award for Best Female Country Vocal Performance for her performance of “Breathe.” The song was also nominated for two other Grammy Awards: Best Country Song and Song of the Year.

The music video for “Breathe” was just as popular as the song itself. It was posted on YouTube in 2009, and has over 31 million views as of this writing.

Clarkson kept her performance of “Breathe” true to Hill’s original version. She sang the opening lines with a soft, tender tone, her voice at a near whisper. Then her voice grew more powerful and passionate once she hit the chorus.

Viewers were mesmerized by Clarkson’s rendition of the song. She earned lots of praise in the comments section on YouTube, with some remarks being:

“I can feel the magic in the air, listening to Kellyoke gets me that way.”

“I love everything about this: the intimate piano part & then the bam in your face part when the band joins her. Every part of this performance is fantastic!”

“Oh, good gracious! What a performance, Kelly! I want to hear the full version, please!!!”

You can watch Clarkson sing “Breathe” by tuning in to the video below. We’d love to hear her cover some of Hill’s other songs in the future!