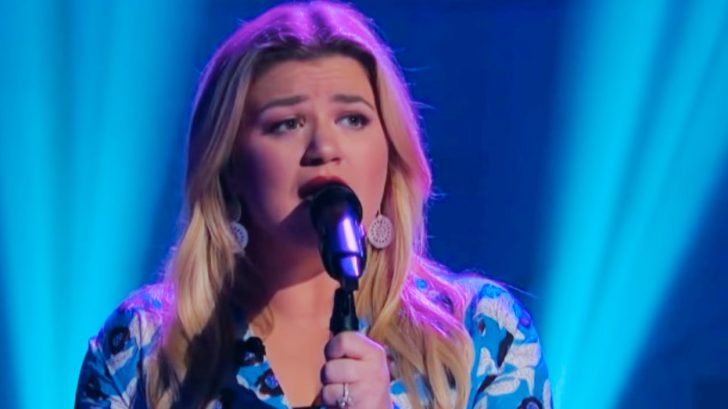 The Kelly Clarkson Show stands out in its sea of competitors. In November 2019, the fairly new show was already the fourth most-watched syndicated talk show in the U.S., only falling behind Dr. Phil, Live with Kelly and Ryan, and The Ellen DeGeneres Show.

So that’s why it came as no surprise when Clarkson announced her talk show would be return for a second season.

Did you hear the news?! #KellyClarksonShow is coming back for Season 2! pic.twitter.com/Mg6whCQTXZ

One of the standout parts of every Kelly Clarkson Show is the opening bit, dubbed “Kellyoke.”

The premise of “Kellyoke” is simple. Clarkson will take another artist’s song, reinvent it, and cover it for her live studio audience and viewers at home.

No genre is off limits for Clarkson, so she has already covered plenty of country songs, including Brooks & Dunn‘s “Neon Moon,” Carrie Underwood‘s “Before He Cheats,” and Garth Brooks‘ “Ain’t Going Down (‘Til The Sun Comes Up).”

She covered the latter song with Brooks himself, and the performance was a show-stopper!

As we mentioned earlier, Clarkson performs songs of all genres during “Kellyoke,” so she decided to try her hand at a major pop/soul hit during one segment. The song she performed was Sam Smith’s 2014 single “Stay With Me.”

The song, which Smith co-wrote, remains the singer’s most successful release to date. The track topped the charts in countries around the world, and went on to win two Grammy Awards in 2015 (Record of the Year and Song of the Year).

Since “Stay With Me” was so popular, numerous other artists and aspiring performers have covered the song through the years. One such artist being country/pop star LeAnn Rimes, who delivered a cover of the song during a show in 2014.

Also in 2014, Clarkson sang “Stay With Me” during one of her own shows. “I love this song,” Clarkson said as she introduced it to the crowd.

A fan managed to capture a video of her performance. In the years it has been on YouTube, the clip has generated well over a million views…Clarkson’s cover is just that good!

So when Clarkson started to sing “Stay With Me” on The Kelly Clarkson Show, everyone watching knew they were in for an outstanding performance.

Clarkson upped the ante with her “Kellyoke” performance of the song, since she had a full choir, a pianist, and a cello player backing her up. Those elements, combined with Clarkson’s powerful voice, resulted in the creation of a dramatic and impactful performance.

You’re sure to get goosebumps when you hear Clarkson sing “Stay With Me” on The Kelly Clarkson Show in the video below. The performance sure gave us chills!

After hearing this, y’all probably can’t wait to see which song she covers next!