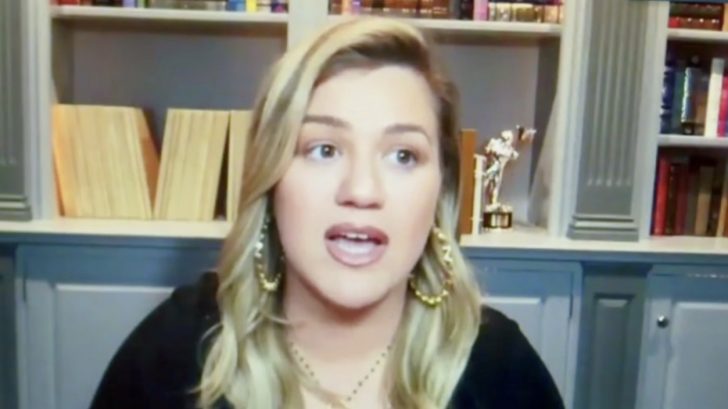 Kelly Clarkson quietly filed for divorce from her husband of 7 years, Brandon Blackstock, on June 4th. Since then, she hasn’t spoken about the end of her relationship – until now.

Sitting down – virtually – with Willie Geist on Sunday Today, she opened up about her divorce for the very first time.

The news of her divorce filing came as a shock to fans, seeing as she and Blackstock had been quarantined together with their children on their Montana ranch since the beginning of the coronavirus pandemic.

Her fans didn’t even know she had left Montana until it was reported that she filed in Los Angeles, California, where the former couple lived, although just one month before the divorce filing, they listed their eight bedroom, nine bathroom home for sale.

During the interview,  Clarkson said, “I mean, it’s no secret. My life has been a little bit of a dumpster. Personally, it’s been a little hard the last couple months.”

While she is going through the pain of her divorce, she has been throwing herself into her work as a talk show host, Voice coach, and has even been working on a new album.

“I’ve been talking to friends that have been through a divorce,” she said. “I don’t know how people go through that without having some kind of outlet because it is the worst thing ever for everyone involved.”

Because her outlet is songwriting and singing, she says her next album will “probably be the most personal one I’ve ever released.”

“The whole record is basically every emotion you experience from the beginning of a relationship to the end of what it is now or where it is now, and it’s been very therapeutic for me,” she told Geist.

Clarkson did say that creating this album with her kids around has been a little weird.

“There’s one that my kids sing in the car,” she said. “I’m going through mixes, and I’m just, like, ‘This is weird.’ Like, it’s your relationship. I’ve never written about my life to where my kids are, like, singing along.”

Geist asked if they understood that they are essentially singing along to a song about their parents’ breaking up, and Clarkson assured him they have no clue.

Clarkson is an incredible songwriter, having written many emotional songs including “Piece By Piece,” so we can’t wait to hear what she has in store for us next. No word on when the album will be released.

Watch her full interview with Willie Geist below.