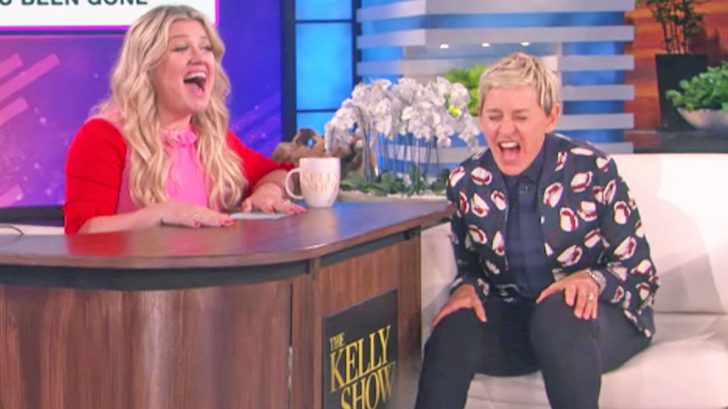 Learning How To Be The Hostess With The Mostess

Things got a little turned around on The Ellen Show!

To get her ready to be a good host, Ellen decided to let Kelly take charge of a segment of her talk show, and they renamed it “The Kelly Show.” Ellen’s producers came out for a quick set change, which gave Kelly a big desk to sit behind, as well as mugs with “The Kelly Show” written on them!

Seems like they were foreshadowing, since Kelly is now an Emmy nominated talk show host for her show, The Kelly Clarkson Show!

Kelly was a complete natural when asking Ellen questions, but she really shined when it came time to do her fan-favorite segment called Kelly Karaoke! Her desk was equipped with a big red button, which she is used to thanks to The Voice, and when she pressed the button, several different song titles would scroll through the screen until it stopped on her hit song “Since U Been Gone.”

Ellen and Kelly tried to harmonize, but Kelly’s voice was so powerful that she kind of just took over and Ellen wasn’t sure what to do! Eventually, they got the audience into it as well.

What Ellen Lacks In Skill, She Makes Up For In Energy

Even though Ellen isn’t a professional singer, and flubbed some of the words in the verses, she made up for it with passionate delivery of the chorus. She scream-sang just like we do at home when listening to this song!

Watch the awesome video below.