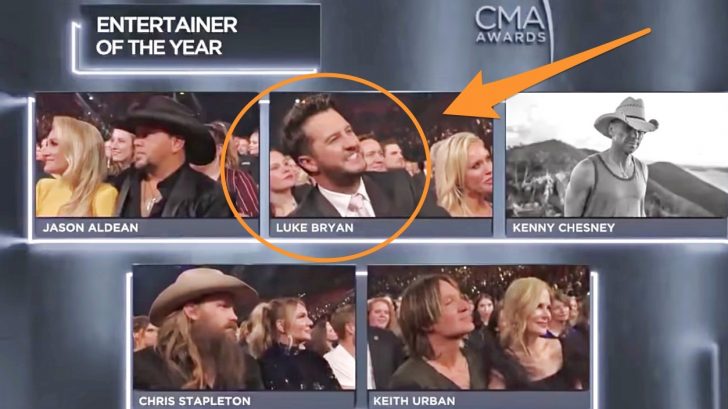 Competitions can get…well, competitive. Everyone puts their effort in to get an award but at the end, only one can be the winner. For the 2018 CMA Entertainer of the Year – that winner was Keith Urban, but his excitement didn’t distract us from some of the runner-ups’ reactions to the big win. Especially Luke Bryan‘s…

The Entertainer of the Year Award was first presented during the 1967 CMA Awards. Since then, country artists all over the world have envied the prestigious honor. For the past two years, Garth Brooks has held the title after breaking ticket sales records in the years leading up to it.

Given To An Australian

Keith Urban is a New Zealand-born, Australian-raised musician. While most people think country music is contained to just the United States, Urban grew up listening to the twangy tunes. He even sang back up in the early 90s for Australian country legend, Slim Dusty!

But as time has gone by, Urban has created his own name in the music industry – and has won hearts all over the world. His most recent international tour, Graffiti U has been a great display of his performing abilities, and just how far his music has reached.

And while he has given the world some of the best music and performances of our time, Urban was not expecting to take home the prestigious Entertainer of the Year Award.

As Lionel Richie stood on stage and read off the award, everyone sat on the edges of their seats. When Keith Urban’s name was called, both he and his wife, Nicole Kidman were in complete shock. Tears flowed as he got up to accept the award – making for one of the most beautiful moments from the televised event.

@KeithUrban so so happy your beautiful wife Nicole Kidman was at the cmas last night to see your big win and celebrate your win with you. Looks like you guys had a great date night pic.twitter.com/dDeoFZDVmw

While we expected Urban and Kidman to get emotional, nothing could prepare us for the level of friendship displayed by Luke Bryan. The two have previously worked together and even performed together, but often “friendships” in Nashville are all business.

But Luke proved this bromance was true, through and through. Despite being up for the same award – when he heard his buddy’s name get called, he jumped out of his seat with joy. Clapping and bouncing with excitement, it was great to see that these friends support each other – no matter what.

You can watch the full video of his reaction and Urban’s acceptance speech in the video below. Let us know what you think in the comments!