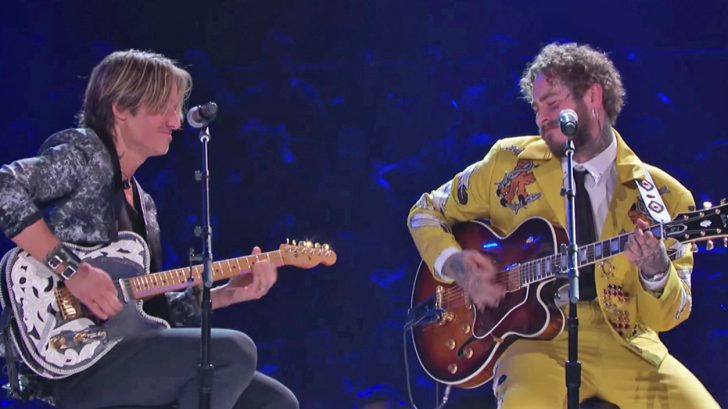 A handful of music’s biggest stars came together for one rockin’ tribute concert in honor of The King of Rock & Roll. Celebrating the one and only Elvis Presley, an array of artists across all genres prepared some of his greatest hits to give fans the experience of a lifetime. Among all the incredible renditions, Keith Urban’s performances had fans burning up.

Urban channeled his inner Elvis a couple times throughout the tribute concert. The singer’s rockstar side came out as he jammed to the 1973 hit, “Burning Love.” Following his solo act, he teamed up with rapper, Post Malone for a duet that fans everywhere can’t stop talking about.

Urban took the stage alongside Post Malone for one fiery duet of Elvis’ version of “Baby, What You Want Me To Do.” Both the performers came dressed to impress as Urban rocked a glittery grey and black suit jacket and Post Malone showed up in a bright yellow suit with silver cowboy boots underneath.

Accompanied by a jazz band, Urban and Post Malone sat side by side with their guitars ready to rock. Urban began strumming his electric guitar before joining Post Malone for the soulful tune. Urban serenaded the audience with his smooth vocals as he and the rapper harmonized perfectly. Toward the end of the chorus, the duo lowered their voices, seducing the crowd just as the King himself did so well.

These two couldn’t have made a better pair for this phenomenal Elvis rendition!

Check out the performance below.

Keith and Post Malone are honoring ELVIS PRESLEY with a duet on "Baby, What You Want Me To Do". ?? Don't miss the All-Star Tribute SUNDAY at 9/8c on NBC!