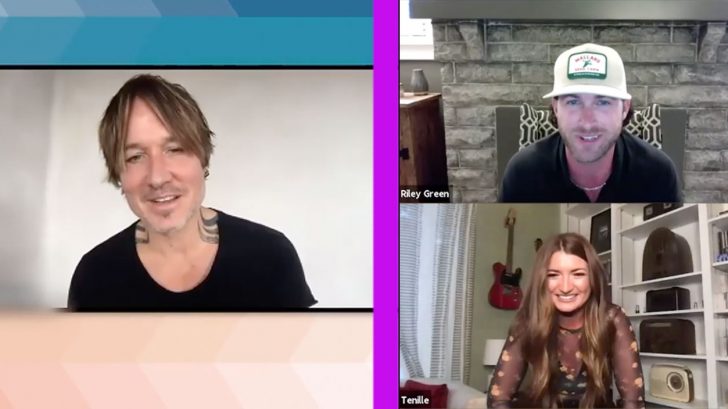 Keith Urban surprised Riley Green and Tenille Townes this morning, August, 20, 2020 by crashing their Zoom calls. He delivered the news that they had been named the new male and new female artist of the year for the 55th Academy of Country Music Awards.

The show was originally supposed to take place April 5, 2020 but was postponed to September 16, 2020 due to COVID-19. Urban was selected to be the host this year.

Green was in the middle of a Zoom conference call with his label when Urban popped up on the screen and asked him when he thought he’d be able to play another show. Green chuckled and said he didn’t know, then Urban said,

“How about playing the ACMs? Would you want to play the ACMs… maybe as the brand-new ACM new male artist of the year?”

Everyone on the call started clapping as Urban broke the news and gave Green a congratulations.

Congratulations to @rileyduckman on being named the ACM New Male Artist Of The Year! #ACMawards host @keithurban crashed Riley's Zoom Meeting to tell him the big news. Catch Riley's performance on the 55th ACM Awards show, coming to you Wednesday, September 16th on @cbstv at 8/7c.

Urban wasn’t done with surprises though. He completely shocked Tenille Townes when he showed up on her computer screen to what she thought was going to be just a regular interview. After exchanging a few pleasantries, Urban got right down to business and congratulated Townes on her huge win.

For the first time in the history of the ACMs, they will be hosted in Nashville rather than Los Angeles or Las Vegas. Performances will happen at the Grand Ole Opry, The Ryman, and The Bluebird Cafe.

Watch the video below to see Tenille Townes’ emotional reaction to the good news.

Congratulations to @tenilletownes on being named the ACM New Female Artist Of The Year! She had no idea her video call would be with #ACMawards host @keithurban , and her reaction when he surprised her with the big news is priceless! Catch Tenille's performance on the 55th ACM Awards show, coming to you Wednesday, September 16th on @CBStv at 8/7c.