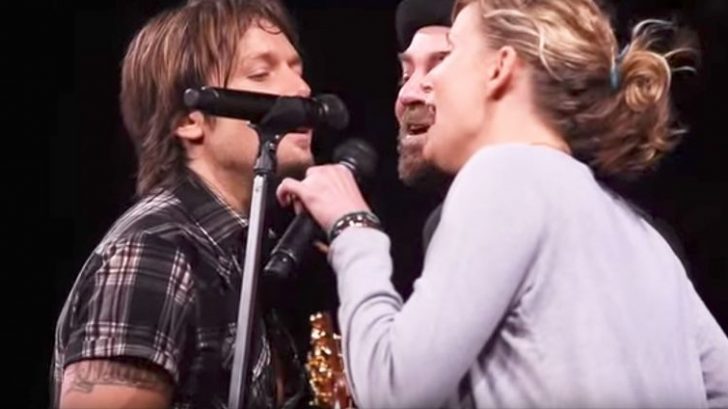 Country superstar Keith Urban packed an epic surprise during a riveting concert, thrilling the crowd with an appearance that shook the venue and brought back a great nostalgic hit!

Performing in Cleveland, Ohio back in 2009, the country superstar informed his fans he was planning to “do something a little different” and asked them to give a warm welcome to country music duo Sugarland! The audience roared with excitement, encouraging members Kristian Bush and Jennifer Nettles to come out on stage and perform!

Nettles was all smiles as she followed Urban to the microphone, waving to her fans and giving high-fives on her way to center stage. The singers chatted briefly before stunning their audience with an unbelievable performance of the Eagles’ unforgettable hit “Seven Bridges Road.”

The three country stars perfectly harmonized their powerhouse voices as they sang, “There are stars/ In the Southern sky/ Southward as you go/ There is moonlight/ And moss in the trees/ Down the Seven Bridges Road.”

Fans went wild, clinging to every lyric they sang with impeccable skill and endless energy. While Nettles manned her vocals, Bush and Urban lent their voices and killer guitar skills for an ecstatic performance these fans are sure to never forget!

Although the Eagles were not the original performers of this upbeat hit, it was their 1980s cover that tied the song to their timeless name and deemed the tune a fan favorite.

Check out this one-of-a-kind performance in the video below and let us know what you think in the comments!